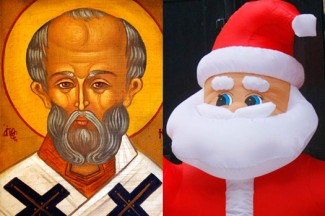 ‘Twas the week before Christmas
and all through our home,
were the decor and dressings
of a quaint yuletide tome.
School-made stockings were hung
to the hymns of a choir,
In the radiant glow
of our fireplace…fire!!!

Horror ensued as I worried how Santa would ever survive his traditional entrance to our home via chimney. Worse still, how would the robot that he was sure to bring going to fare in the soot and heat? Though I’d been told that Santa worked through my family and friends to bring the presents on Christmas morning, I was always convinced that somehow, somewhere, he really did exist. Ironically, Santa proved me right not at Christmas, but at Easter.

The Easter I became Catholic, members of the parish community who observed my journey to the Church chose my confirmation saint name. I was given the name “St. Nicholas” because of my gift of bringing tidings of comfort and joy. Honored to be the namesake of the original Santa, and suddenly wildly intrigued about him, I did some research. It was then that my childhood fascination with the iconic Santa figure developed into true admiration of a man whose inimitable gifts of generosity would create his legacy.

Scant details are known about St. Nicholas, yet therein lies his power. Born into wealth in the once Greek province of Asia Minor called Patara in the early fourth century, he suffered the loss of his parents at a young age. Boldly, and still a youth, he abandoned his fortune to find his purpose by way of a pilgrimage to Egypt and Palestine. During his journey Nicholas was said to exercise great generosity toward children and the poor. His renown inspired the hearts of many and upon his return, the young man was made Bishop of Myra in Lycia during the persecutions of the malevolent Emperor Valerius Diocletian. Though released during the hopeful reign of Constantine, his fight for justice would continue until his death circa 350. These facts draw a rough sketch of a great man. The vivid colors come from the legends told.

Foremost is the tale of St. Nicholas throwing bags of gold into the window of a father’s home in order to save his three young daughters from resorting to prostitution to procure their dowries. In remembrance, some may find a sack containing a tangerine and dollar hanging on their doorknob in celebration of St. Nicholas’ feast day December 6. Yet such lore still fails to capture the life of the noble man who faced blatant injustice armed with revolutionary acts of love and generosity.

St. Nicholas once came to the aid of three innocent men awaiting execution due to a bribe accepted by then governor Eustathius. At the moment of execution, Nicholas came and stayed the hand of the executioner with so strong a grip that the proceedings stopped. He then turned and relentlessly reprimanded Eustathius. Truth was shone victorious over injustice! The governor admitted to his misdeed, and the innocent men were released.

Throughout the centuries the beloved influence of St. Nicholas crossed time and tide. To the Dutch he is the iconic figure of the giving season known as “the Sinterklaas” who arrives by boat in his bishop reds and inspires the generosity of the people, who for a brief moment put aside grudges in favor of giving. On the evening of December 5 (the day before his feast) Sinterklaas brings small toys to children who have been well behaved throughout the year. Sound familiar?

A wide array of Eastern and Western cultures and ethnicities have an expression of St. Nicholas. Here in the United States the bishop’s red robes have morphed into a winter coat and pants. The mitre has developed a white top and rim. The crosier staff became a cane of candy with a red and white motif. And Sinterklaas became Santa Claus. Though consumerism attempts to dull his story, I’m not easily fooled. Look beyond the ads and decorations and you may be able to hear the St. Nicholas in Santa Claus calling for radical generosity and social justice even today. I still hear it! Can you?

The spirit of St. Nick is alive and well when a church decisively and courageously strives to offer gifts to the children of families who are financially strained and puts food on their tables all without compromising an inch of their dignity. People who forgo their need for the latest gadget and instead make it possible for others to have clean water and food are modeling the generosity of St. Nicholas. And in this season when people risk their lives and livelihoods to protect the rights of another and call out injustice they are walking in St. Nicholas’ footsteps.

Santa Claus is coming to town, y’all. It’s a good thing! But, before I hit the stores and become hypnotized by the romance of the season (’cuz I love Christmas music and decor), I am going to invite Santa in for some milk and cookies. And, before I let him fill my stockings hung up on the hearth, I’m going to let him fill my heart and mind with the inspiration and courage to give like I’ve never given before, so that my gift of offering tidings of comfort and joy may be enriched, that this Christmas, I may bring a greater gift of good will toward all.