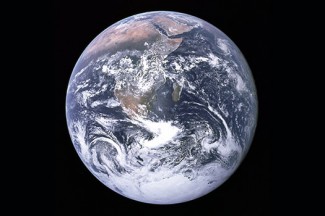 One of the first and key places I encountered the spiritual ideas that eventually led to my baptism was Estes Park, high in the Rockies, amidst Birkenstock-wearing radical environmentalists. It was an interesting time for politics in the late 80s and early 90s and I was looking for new ideas. So were lots of people, and they were talking with each other and reading each other’s books despite divergent backgrounds. Some were grassroots activists, some academics; some were pragmatic, some utopian. There were communitarians and Greens, libertarians and socialists.

I came upon something new (to me) there, something I’d never heard of before with my atheist/Protestant upbringing: natural law. Most didn’t use the term. But the edges of the environmental movement were abuzz with fresh ideas, and two of the freshest were “deep ecology” and “ecofeminism.” (One of deep ecology’s leading lights was Fr. Thomas Berry, CP, whose The Dream of the Earth was required reading.)

It was at that conference in the Rockies that I first heard a woman argue that a pro-abortion stance was anti-woman. And though I didn’t hear the term “seamless garment,” there was a quiet respect for those Catholics and Buddhists who adhered to defense of life across the board, from anti-war and anti-death-penalty to anti-abortion and anti-euthanasia to environmental protection and reducing unnecessary deaths from starvation.

Justice, Peace and the Integrity of Creation

One of the first and key places I encountered the spiritual ideas that eventually led to my baptism was Estes Park, high in the Rockies, amidst Birkenstock-wearing radical environmentalists. I came upon something new (to me) there, something I’d never heard of before with my atheist/Protestant upbringing: natural law.

It was in this same time period and setting that I encountered the phrase and concept, “Justice, Peace and the Integrity of Creation” or JPIC. (My recollection from those times is that this was a Catholic movement and, at least within the Church, it’s an outgrowth of the Pontifical Council for Justice and Peace, though the phrase is used by others too.) In essence, the idea of JPIC — and the original long-forgotten idea of the Greens in general — was a simple step that had profound implications. By linking environmental issues with social justice and peace issues within the same structures, it created dialogue among bureaucrats and activists from those areas.

By accident or design, this sidelined the pro-industrialism state socialists, whose model is the flipside of the same coin as consumerism and is just as wedded with the material realm — and just as much in conflict with what Pope John Paul II called “the ecological question which accompanies the problem of consumerism and which is closely connected to it”:

“In his desire to have and to enjoy rather than to be and to grow, man consumes the resources of the earth and his own life in an excessive and disordered way. At the root of the senseless destruction of the natural environment lies an anthropological error, which unfortunately is widespread in our day. Man, who discovers his capacity to transform and in a certain sense create the world through his own work, forgets that this is always based on God’s prior and original gift of the things that are. Man thinks that he can make arbitrary use of the earth, subjecting it without restraint to his will, as though it did not have its own requisites and a prior God-given purpose, which man can indeed develop but must not betray.” — Centesimus Annus, 37

I wish the movement had been able to link conservation and small-c conservatism through our Scripture-based responsibility as stewards. It’s a cause I tried to advance; unfortunately, that political gulf was too wide to bridge. But if anyone can stand up effectively for Creation against unfettered consumerism and industrialism, then it has to be faith-based groups. And now that some within the evangelical community are embracing the small-c conservative principle of stewardship, it looks like the tide of public sentiment is finally turning.

But political strategies aside I was just struck, back then, with the profound Truth of it: that how we treat each other and how we treat the environment are related; and that conversely the answer to environmental problems is not forcing lots of new regulations on people, but increasing awareness of the preciousness of Creation. That as long as people approach all of life based on material fears — that they won’t get what they want or will lose what they’ve got — then long-term ecological concerns will always take a back seat to immediate “needs.” As Pope Benedict says in his 2009 encyclical Caritas in Veritate, while policy changes and education are important, “the decisive issue is the overall moral tenor of society.”

As long as people approach all of life based on material fears — that they won’t get what they want or will lose what they’ve got — then long-term ecological concerns will always take a back seat to immediate “needs.”

Personally, what I saw as the integrity of this faith-based approach was another piece that fell into place in my long journey to conversion. It provided a framework that pulled together seemingly unrelated views under a single coherent law. It made sense to me immediately.

The Catholic Church has continued to embrace and expand these principles. Caritas in Veritate managed to infuriate both political sides, a good indication that it has challenging Truth both need to hear. In it, Pope Benedict cautions that “the way humanity treats the environment influences the way it treats itself, and vice versa,” and says “what is needed is an effective shift in mentality.”

So, sure, I reduce, reuse and recycle, but I also know that won’t turn this thing around. My focus is on helping people increase their awareness, through everyday spiritual practices that help them stay more connected. Because when people are more awake, more present to the world around them, then whether they live in the city or the countryside, they will see the beauty, abundance and spectacle of Creation in all its vivid color. And they will mourn, in the way celebrated in the beatitude, when they see that Creation being harmed. This is the way to lasting change.

This article was originally published on April 22nd, 2010.