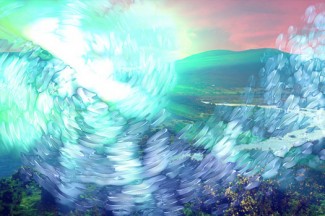 In the book of Genesis, Joseph, the 11th son of Jacob, was a dreamer. Not a lofty-ideas-about-his-future and mighty-ambitions dreamer, but a fall-asleep-and-have-vivid-dreams-that-relentlessly-came-from-God dreamer.

He had a series of dreams, as detailed in Genesis 37, which suggested he would one day wield a great deal of power as a ruler. But Joseph didn’t want these dreams. They actually plagued his nights. To seek some sort of relief, he told his brothers about them — brothers who already had a great distaste for and jealousy of Joseph churning inside them.

So, the story goes like this: Joseph was sold into slavery by his envious brothers and ultimately rose to become the second-in-command in all of Egypt — the most powerful man after Pharaoh. Joseph’s dedication to his faith despite his difficult circumstances was a tribute to the vision he knew he had received from God.

I too am a dreamer. Since I was a child, I’ve had visions. Some of them premonitions, others answers to things I was confused about or desperately needed guidance on. It wasn’t until five years ago, as I began the upward climb into adulthood, that I realized these dreams weren’t coincidence, but instead were a route that God was using to speak to both my heart and my spirit.

How did I know these dreams were from God?

The contents of my dreams spoke to things I hadn’t bothered to share with a living soul or illustrated something so perfectly that only God could be the origin. A huge reason I have been able to discern my dreams and their significance is due to guidance from my spiritual director. In several conversations with her, I have learned a few things from owning these dreams that come from God.

I know that God will use any means available to speak to us, whether it be nature, the stillness of silence, or a complete stranger that just so happens to cross our path. For me, those are my dreams. Sometimes I get so busy and distracted with my life and its happenings that it gets hard to hear that still, soft voice that speaks so distinctly. When I’m asleep, there are no distractions to deter me from the truth God is trying to impart.

I also know that although these dreams come from God, simply having the dreams and the message sticking with me once I awake isn’t enough. Usually after a dream, I take the time to very quickly jot the details I remember and also exercise discernment. I ask God to tell me what I need to do with the information and message I received, so I know the way forward, whether it means I speak to someone about the subject of a vision (if it was about another person other than myself) or simply pray for them.

For instance, one theme that has played out in several of my dreams in the past few months is dating and romantic relationships. Many other things have taken my attention in the past six months — building my freelance repertoire, completing my thesis, finishing up graduate school successfully — that I pushed meeting someone new to the back burner. Nonetheless, putting myself out there is something I wanted to explore, especially since next month will mark a year of singledom.

Over the course of six weeks, I had three dreams that directly spoke to that issue. The first one revolved around the right relationships happening with ease, instead of one or both parties pushing to make something happen or fit. The second spoke of letting the man in my life take the lead and not being controlling, which is something I have struggled with in past platonic and romantic relationships. The third and final dream was a vision with a dear friend in it. In the dream, she spoke calmly and softly and said, “If I have found my love, you will, too. Don’t despair.” I hadn’t spoken to this friend in months and later found out that she was in a new relationship and blissfully in love.

All these dreams may seem foolish and unfounded, but I know, without reservation, that God understands the desires of my heart, particularly as it comes to meeting someone and cultivating a healthy relationship. I know with the most blessed assurance that although things might seem hopeless or without cause now, that the future holds so much promise and that God is listening.

Joseph trudged through his days in slavery consumed with the betrayal his brothers had dealt him. Yet he knew there were better days ahead because of his vision. I, too, now, have that same confidence because of my dreams.

I know, without a doubt, it is most assuredly possible to possess the deep down reassurance (and matched perseverance) to prevail through the doubtful and trying periods of my life. God has shown me, despite it all, his perfect will will be done, and I will be okay.