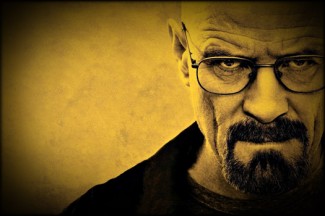 When we first met Walter White back in 2008 — and if you’re not already familiar with the AMC drama Breaking Bad, which commenced its final half-season August 11, consider this your official SPOILER ALERT — he was a just-turned-50 high school chemistry teacher recently diagnosed with lung cancer. Wanting to provide for his pregnant wife and disabled son, Walt (Bryan Cranston) turned his scientific training to the production of the best, purest crystal meth on the drug market.

That’s a cute, quirky premise, one that sounds like a setup for a crime comedy in the vein of Ocean’s Eleven, Pulp Fiction or Weeds. True, Breaking Bad has its darkly comic moments, and, true, Walter does start out as sympathetic in his slack-jawed haplessness. However, Breaking Bad is neither a water-treading exercise in action and style nor a varnished caper played for laughs. Rather, Breaking Bad’s power derives from the oh-so-gradual transformation of the central character. Series creator Vince Gilligan and his team have pulled off a nearly impossible feat: They have created a show as introspective as it is explosive, one that uses its riveting plot to grapple with deep questions about meaning, morality, and how a man turns into a monster.

Walter claims that everything he has done, he has done for the sake of his family. It’s clear from the get-go, however, that Walt’s motives are more mixed than even he realizes. Secretly he enjoys the thrill of his illegal lifestyle. In the drug trade, Walt finds the power and respect so glaringly missing from his workaday life. Still, Walter has his scruples and can’t do something he knows is wrong without a very good reason. So, he finds good reasons. By the time Walter rationalizes his role in a deadly plane crash by noting that the plane was only two-thirds full, we know that he has completely lost his moral compass. The repulsion we feel as we see Walt slide into ethical blindness has the side effect of affirming that right and wrong do exist and are distinguishable. In direct opposition to our often blithely relativistic culture, Breaking Bad suggests that some acts are simply wrong, no matter how we justify them.

Indeed, what really drives the narrative of Breaking Bad isn’t the blood and guts but the slow deterioration of a soul. The season four finale “Face-Off” was a breathlessly paced suspense thriller, a high-stakes kill-or-be-killed battle of wits capped with a gruesome explosion, but the real sucker punch came when we realized that Walter had sunk to a new ethical low — that he was now capable of temporarily poisoning an innocent child and lying about it in order to manipulate his partner’s loyalties. The true threat in Breaking Bad isn’t ruthless drug dealers, vengeance-bent cartel members, or the DEA; it’s the damage Walter keeps doing to his own humanity.

Contrast Walter’s evolution with that of his partner, Jesse Pinkman (Aaron Paul), the trash-talking junkie meth-dealer with a soft spot for kids. Unlike Walter, Jesse has a clarity of moral vision that renders him incapable of self-deceit. “I’m the bad guy,” he says. How different from Walt’s delusional insistence on the purity of his intentions. In the episode “Problem Dog,” Jesse agonizes over his murder of a harmless but inconvenient man. When his support group urges him to accept himself, Jesse reacts with a heartbreaking speech that discloses his crushing guilt and his need to believe in justice: “The thing is, if you just do stuff and nothing happens, what’s it all mean? What’s the point? […] So I should stop judging and accept? […] So no matter what I do, hooray for me because I’m a great guy? It’s all good? […] What a load of crap.”

So is Breaking Bad a cautionary tale, a fable in which good guys and bad guys are clearly demarcated, virtue rewarded, and vice punished? That would be far too simplistic a summation of this profound and intricate drama. Virtually every character on Breaking Bad has elements of light as well as dark, and our love for the characters keeps us caring about their fates even as we lament their poor choices. Walt is a modern-day Macbeth, and Breaking Bad has the depth and complexity of a Shakespearean tragedy. Without ever descending into preachiness, the show asserts the importance of knowing good from evil and choosing the former. In the world of Breaking Bad, actions have reverberating consequences, and if the show never overtly comes out in favor of an objective morality, it certainly showcases the inadequacies of ethical subjectivism.

Make no mistake. Breaking Bad is a spiral into pitch-black depravity, a story of greed, pride, deceit, betrayal, violence, murder and callous disregard for human life. It is also possibly the most moral thing on television.