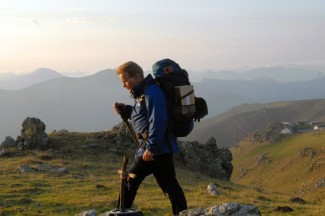 The Way, written and directed by Emilio Estevez (Bobby) and starring his father, Martin Sheen (Apocalypse Now, The West Wing, The Departed), is rather obviously about the spiritual journey. The Camino de Santiago, called “The Way,” is a literal spiritual journey, a 1,000-year-old 500-mile pilgrimage route across the Pyrenees. The lead character Tom (Sheen) takes a physical journey to Spain and eventually on the Camino while also taking a spiritual journey starting with word that his son (Estevez) has died. Many of the other characters Tom meets along the way are on their own spiritual journeys, whether they are Camino pilgrims or not.

Despite being built around a religious pilgrimage, however, The Way is not a “faith-based” film; rather, it is a movie about a human story, and the human story. There is no preaching; there are no soppy scenes meant to tug at the spiritual heartstrings. Estevez’s writing reveals a sophisticated understanding of the beautiful brokenness of people, the glorious absurdity of it all. One of the overarching themes is how Tom gets thrown together with other pilgrims. Not only was it his intent to travel alone, but if he were to travel with others, these are definitely not the others he would choose. But it is precisely through struggling with each other’s imperfections that we are challenged, pushed outside our comfort zone, and, sometimes, forced to grow spiritually whether we like it or not.

I asked Estevez about this aspect of the film, and he said: “If we are honest, I think the first thing we’d agree on about ourselves is that we are imperfect, that we are these beautiful, wonderful disasters, all of us. We are. That’s the first step; acknowledging that you’re this beautiful wonderful mess. And yet, that’s how we connect to one another. We’re in a culture now that says, you can take this pill and it will make you happy, or take that pill and you’ll be thinner, or visit this plastic surgeon and change the way you look, and yet, none of that stuff makes you happy ultimately, because you’re still left with yourself. And I think, if there’s a theme in the film, it’s: How about being OK with exactly who you are. How about being comfortable in your own skin, being exactly this beautiful wonderful mess that we are, because God loves us no matter what we are, who we are. But why don’t we love ourselves in our imperfections. So that’s really the larger question in the film: How do we get to that place where we’re OK being exactly who we are?”

Maybe this aspect of the film stood out for me because I reacted so strongly myself. The motley crew perfectly captured a range of annoyingness. I found the overbearingly friendly Dutchman (Yorick van Wageningen; Winter in Wartime) almost intolerable, and kept wishing Tom would get away from him. The too-clever and self-involved Irish writer Jack (James Nesbitt; Cold Feet, Bloody Sunday, Murphy’s Law, Millions, Jekyll) is like many a friend I’ve tolerated in my life. On the other hand, perhaps not surprisingly, I found the chain-smoking sarcastic divorcée Sarah, portrayed beautifully by Deborah Kara Unger (Crash, The Game, Combat Hospital) to be intensely attractive despite (because of?) her extreme brokenness.

It was a delight, too, to see a favorite actor, Tchéky Karyo (Full Moon in Paris, La Femme Nikita, Bad Boys, The Messenger, The Core), as the police captain, a small but important role.

A father and a son

The anchor is out-of-shape California doctor Tom. As the movie begins, he learns his estranged son has died while on the Camino. Traveling to France to retrieve the remains, he instead finds himself completing the Camino “with” his son, whose ashes he carries in his backpack.

It’s impossible to imagine what Tom would have been like portrayed by a different actor. Estevez wrote the role for his father and the entire project began with Sheen. He travelled part of the Camino with his grandson, Estevez’s son, while on a break from The West Wing, and encouraged Estevez to consider making a documentary. But Estevez wanted to take it in a narrative direction.

So Tom is Sheen and Sheen is Tom (though nowhere near as cranky.) In the same way, it’s impossible to separate the resulting film from the fact that it is a father-son production about a father and son. Though it’s not autobiographical, you can feel that energy in the writing and acting. And you can feel the love Sheen and Estevez have for the Camino and for talking about the spiritual journey; that love surges through the film.

Another theme of The Way is that the spiritual journey is not always what, when or where we think it is. Tom is a reluctant pilgrim. He has no intention of growing spiritually, or going on the Camino. But he finds himself drawn and pushed into it by events and by other people. The other pilgrims may have reasons they’re on the Camino, but they learn much more along The Way.

Watching The Way, I was reminded of a passage from the new David Brooks book, The Social Animal:

“We are primarily wanderers, not decision makers. Over the past century, people have tended to conceive decision making as a point in time. You amass the facts and circumstances and evidence and then make a call. In fact, it is more accurate to say that we are pilgrims in a social landscape. We wander across an environment of people and possibilities.”

All the characters in The Way are pilgrims wandering a social landscape, being changed by it.

Anyone who has walked the Camino will of course find The Way evocative and moving. Busted Halo‘s production editor, Joe Williams, who blogged about walking it this summer, said the movie made him want to go right back. The Way will easily join a short list of quality films that are enjoyed by spiritual seekers, a list that includes movies like Into Great Silence and Of Gods and Men. Moviegoers will get a taste of what the pilgrimage is like (though it understates the physical hardship of walking 500 miles.) The Way has the potential, though, to reach a much larger audience, thanks to its star power, its beautiful scenery and especially thanks to the fact that it is above all a human story to which everyone can relate whether or not they’ve ever called their journey spiritual.