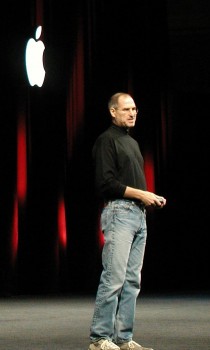 “We believe that people with passion can change the world for the better.”

This summer, I spent a lot of time in a room that overlooked the graves of Sam Adams, John Hancock, and the parents of Benjamin Franklin. And also with me in that room, along with the ghosts of the American Revolution, was my new 21.5-inch iMac with the 2.5GHz Core i5 processor, the invention of another American revolutionary.

I share the processor speed because, as any Mac nerd would know, this machine is on the lowest end iMacs one can currently purchase.  But even so, it cuts through the processing of HD video like Bill Clinton would a plate of pork chops. It was in this room in Boston that I was working on my first documentary film. And there was this moment in the middle of editing footage I had shot that day on the new Final Cut Pro that I realized that it would have been impossible for me to do the kind of film that I was trying to do 20 years ago in the rather minimalist way that I was trying to do it.

Being a filmmaker was a dream that I had had ever since I was a kid. I was born at exactly the right time for Star Wars to capture my imagination, for Superman the Movie to make me believe I could fly, and for Raiders of the Lost Ark to give me my first — albeit shaky and supernatural — introduction to the Old Testament. But the concern, in those days of course, was that in order to make film, one would either need to hit the big time in Southern California — which held the possibility of ending up as a cautionary tale on the next E! True Hollywood Story — or NOT hit the big time in Southern California, which would have the same ending as the E! True Hollywood Story minus the cable television remembrance. Neither outcome seemed particularly desirable.

I have to confess, the part of me that has loved Mac computers for as long as I can remember sometimes strafed at the idea of becoming an official member for another worldwide organization for whom the slogan “Think Different” is not usually associated. But that’s when I remember that while “thinking outside of the box” is not typically a value that my church holds, it does often force me to think different in other areas of life — something that I might not have done before. And I am also reminded that the church, like Apple Inc., was started by somebody who would easily fit the commercial montage that begins with, “Here’s to the rebels.”

But that conversation can be held another day because today is a day to honor those individuals who have reminded us about the limitations those communities can sometimes impose, the individuals on whose achievements we stand because they chose to “think different.”

Tom Gibbons is looking to have his film about Paulist Founder Isaac Hecker, Ralph Waldo Emerson, and Henry David Thoreau finished in January of 2012.