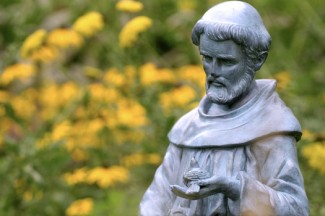 Easter is a liturgical time when we celebrate the Resurrection of the One who “makes all things new” and anticipate the descent of the Holy Spirit, through whom God creates and “renew[s] the face of the earth,” at Pentecost. While bodily resurrection and the indwelling of the Holy Spirit clearly impact the human person, the Easter Season extends to and includes all of creation.

As I’ve prayed the Liturgy of the Hours this Easter Season, I have been reminded of the intimate connection between Easter and God’s call to care for creation. Building on the ancient Jewish rhythm of daily prayer, the Liturgy of the Hours follows a four-week cycle of psalms and canticles. The canticle for Morning Prayer on Easter Sunday (Week I) was Daniel 3:57-88, which invites “all you works of the Lord” to “praise and exalt him above all forever.” The scope of the list of creatures indicates that the canticle truly means all works of God the Creator.

The canticle begins with angels and the heavens, the sun and moon and stars. It continues in our atmosphere with shower and dew, winds, fire and heat, cold and chill, frost and chill, ice and snow, nights and days, light and darkness, lightnings and clouds. It comes to the earth, including mountains and hills, “everything growing from the earth,” “you springs,” seas and rivers, “you dolphins and all water creatures,” “all you birds of the air,” “all you beasts, wild and tame,” and finally human persons.

In the Easter Season and Pentecost scriptures, we hear Jesus Christ repeat, “Peace be with you,” to emphasize his mission of reconciliation. Both of the most recent popes emphasize the relationship between peace and care for creation.

St. Francis of Assisi, popularly patron saint of birdbaths and garden statues, officially patron saint of ecologists, embodied this participation in the chorus of praise that creation intends to offer to God. Francis praised God with creation as well as through and for creation, most notably in the Canticle of the Creatures, which he composed toward the end of his short life.

Francis knew that all God creates is good and expresses God’s love, even through suffering. Francis approached fellow creatures, including Sister Water, Brother Wind, our Sister Mother Earth, and even Sister Death, as members of his family, God’s family. Praise in Francis’ case did not mean complacency with the status quo; rather, Francis concerned himself with the welfare of all the creatures God had seen fit to bring into the world through love, extending the Christmas celebration to birds and animals by instructing political leaders to provide extra grain and fodder, rescuing worms from footpaths, and walking gently on rocks in honor of God the Rock.

Francis developed this sense of grateful praise over time, as did St. Angela of Foligno, who founded the first community of active Franciscan Sisters. Both Francis and Angela pursued pleasure in the world only to find sorrow and emptiness in their debauchery. Only God’s love could satisfy them. Once they embarked on lives of penance, reorienting their desires towards God and thus loving creatures out of love for their Creator, Francis and Angela discovered the abundance of God’s love overflowing in creation as an extension of the profound mystery of the Incarnation. In response to the Incarnation, Angela proclaimed, “You who surpass our understanding have become understandable! You who are uncreated have become a creature! You who cannot be touched can now be felt by physical contact!” Angela contemplated the Incarnation so deeply that she could say that “the world is pregnant with God!” Seeking the Creator, Angela and Francis recognized God’s self-revelation in creation.

What if, with Francis and Angela, we behaved as if the world were pregnant with God, bearing God’s life and love? We would act with reverence for the sacredness of all life, respecting the nature and limits of creatures and ecosystems, ensuring time and space for rest and restoration, ordering all our interactions and relationships toward health and fertility rather than manipulation and exploitation.

Climate change and the Church

Along with other faith partners, the Catholic Church in the United States has responded to the challenge of climate change through the Catholic Coalition on Climate Change. You can join the coalition’s Catholic Climate Covenant by taking the St. Francis Pledge to Care for Creation and the Poor, which helps you pray, learn, assess, act and advocate in relation to those affected by climate change, and transform destructive practices and policies. The Franciscan Action Network (FAN), a collective Franciscan voice seeking to transform U.S. public policy related to peacemaking, care for creation, poverty and human rights, is a member of this coalition.

Resources from the Catholic Climate Covenant:

The Catholic Church throughout the centuries has called our attention to these limits, including through the voices of John Paul II and Benedict XVI, who see disordered human activity behind environmental degradation and injustice, including climate change. In the Easter Season and Pentecost scriptures, we hear Jesus Christ repeat, “Peace be with you,” to emphasize his mission of reconciliation. Both of the most recent popes emphasize the relationship between peace and care for creation.

In his Message for the World Day of Peace in 1990, John Paul II explored “Peace with God the Creator, Peace with All of Creation“; for the same occasion in 2010, Benedict XVI argued that “If You Want to Cultivate Peace, Protect Creation.” In a polarized culture that often succumbs to false dichotomies, these popes have emphasized the “Catholic and” to advocate for people and the planet, human life and the environment.

My own first-hand recognition of climate change came from the stories of local staff who work at Nyumbani Children’s Home in Kenya where I volunteered after graduating from university. As they described changes that disturbed the agricultural patterns families had relied on for centuries, I perceived the interdependence of all life and recognized the special responsibilities of the human person in the order of creation. Since that time, I have received great encouragement from the Church’s concerned attention to environmental degradation and the human communities that suffer with the Earth. (See sidebar for additional resources.)

The Catholic Church’s liturgy, saints, and teachings recognize that the “profound moral crisis of which the destruction of the environment is only one troubling aspect” (John Paul II, 1990 World Day of Peace Message) stems from our human failure to recognize the Creator’s expression of love through the order of creation and respond with our rightly ordered love for God and our fellow creatures. Easter and Pentecost invite us to discover who we are in God’s plan of love and peace and to praise the Creator by living out this love in all of our relationships.