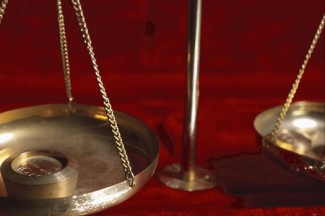 We are told it is natural to thirst for fulfillment in aligning our life with God’s plan for us and to thirst for the kingdom of heaven on earth to be made manifest around us. So how is this compatible with the idea of accepting everything exactly as it is? This tension is expressed in the Serenity Prayer, which I’ve written about here before. In one line we ask for the courage to change what we can; in another the serenity to accept what we can’t. The prayer’s author then adds a request for the wisdom to know the difference. Well, that’s easier said than done, isn’t it?

Usually in this column, I at least take a stab at giving some advice. But here all I can do is acknowledge the tension. For myself, I focus on acceptance. Because that’s what I need to emphasize. Whether it’s my maleness, my intellectual temperament, my upbringing, the culture I live in, or something less easily label-able, I was primed in life to want to figure things out, fix them, have answers. So, balance is restored when I lean towards acceptance — when I stop trying to control things and just let them be — when I accept reality in the present moment exactly as it is.

Most of us, most of the time, need this side of the scale emphasized as a counterbalance to the modern world. Someone whose M.O. has always been inaction may need to emphasize willingness to change, though, to restore their balance.

I was primed in life to want to figure things out, fix them, have answers. So, balance is restored when I lean towards acceptance… But it’s not that simple, because I also have a history of standing at the crossroads of big life decisions and being frozen in fear, resulting in the “choice” of no action.

When working to embrace acceptance, it’s also useful to limit exposure to things we are powerless to change. This is why I have always advocated avoiding the news except in rare instances. It can be anxiety producing to be bombarded with problems you’re in no position to affect. Slacktivism might give the illusion of responding to issues, but I think deep down people know it’s just a way to feel like they’re doing something.

I’m not saying to put your head in the sand or harden your heart. Jesus said, blessed are those who mourn and blessed are the peacemakers. It’s right that we should yearn for all the problems around us, in the society and in ourselves, to be healed and made perfect. We should take actions towards that goal where and when we can be effective. But that goal is not helped by watching the news or skimming the hate-filled political blogs and getting worked up about things.

But it’s not that simple, because I also have a history of standing at the crossroads of big life decisions and being frozen in fear, resulting in the “choice” of no action, which itself leads to some set of results. You’ve probably been there too. So, we can’t just sit comfortably in acceptance and never do anything. Sometimes, the courage to take decisive action is exactly what’s called for. And the dis-ease that stirs up inside when such an action is asking for our attention needs to be answered or it will get louder and louder. This is what Steve Jobs was talking about when he asked whether or not, first thing in the morning, you are looking forward to your day.

So, we live with the need for discernment between those things we can change and those we can’t. We seek help with that discernment in prayer, and through friends and spiritual advisors. We pray for God’s kingdom to come and will to be done on Earth today, knowing the reality is far from it. We take actions where we can and we embrace the imperfection. We live with the tension.