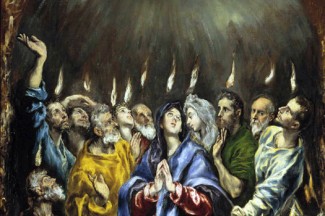 The beginning of Acts 2 reads like a breathless passage from a Hollywood screenplay:

When the day of Pentecost had come, they were all together in one place. And suddenly from heaven there came a sound like the rush of a violent wind, and it filled the entire house where they were sitting.

Like so many well-known passages from scripture, I thought I knew this one until I read it closely and repeatedly, and with a group. What emerged in the reading and was clarified for me is that this Pentecost story has a perspective distinct from the passages in John and 1 Corinthians that also talk about the Holy Spirit.

While other passages offer long or short lists of spiritual gifts, the focus here and in some other places in Acts is on preaching ability, or more broadly, being filled with confidence, being emboldened.

I usually think about the Holy Spirit in one of two ways. The Paraclete of the Gospel of John is an advocate, intercessor, counselor and comforter promised to come after Jesus — to kind of make up for his absence.

More often, I think of the Holy Spirit almost as synonymous with God’s Will/the Way/the Tao — or a pointer to it, if that makes more sense for you — the Holy Spirit as a guide, a touchstone to know what path to follow in life situations. Discernment is often aimed at recognizing what you already know the Holy Spirit is telling you.

The understanding of the Spirit here in Acts is distinct and exciting. “You will receive power when the Holy Spirit has come upon you; and you will be my witnesses.” (Acts 1:8) What it promises us is that if the Spirit is in us, we will be able to boldly live out the Good News. Whether this takes the form of speaking confidently of faith, or in taking the leap to follow our calling.

But the understanding of the Spirit here in Acts, while connected, is distinct as I read it, and exciting. “You will receive power when the Holy Spirit has come upon you; and you will be my witnesses.” (Acts 1:8) What it promises us is that if the Spirit is in us, we will be able to boldly live out the Good News. Whether this takes the form of speaking confidently of faith, or of taking the leap to follow our calling.

I used to be terrified of public speaking. I once watched a job, and to some extent a career path, fizzle out because I couldn’t do it. And I tried a few times, but I was so nervous and unsure of myself that I was terrible. For years, this was an embarrassment, and I could do nothing about it.

But when I started working with the subjects of faith and recovery — subjects that were connected to my calling — the fear was just gone. Gone. It was as if I had no fear of speaking at all. Today I look out at an audience of 500 and simply see people with whom I want to share my message. Of course I have butterflies before I start, but that’s not fear; that’s because I want to do a good job.

Though, as I said, the Paraclete of John is a different take on the Holy Spirit, I find a connection in the phrase from John 15:26, “the Spirit of truth.” When I feel grounded in Truth, when I know what I’m talking about and I know that there’s nothing insincere about what I’m saying or how I’m presenting myself, then I am fearless.

Have you had an experience like that? Where a usual fear or hesitance vanished when your actions were grounded in capital-T Truth and in line with your calling? When the Holy Spirit was in you, empowering and emboldening you?

It’s Pentecost this Sunday so just a bit of history, if you don’t mind. Pentecost is a Greek word that simply means “fiftieth.” It was the Greek name used for the Hebrew holy day called Shavuot. It was and is the Jewish festival celebrating the first wheat harvest of the year. It happens seven weeks after the second day of Passover, in other words 50 days after Passover. Thus “pentecost” meaning “fiftieth.” In the first century, Shavuot was one of the three festivals in which Jews travelled to Jerusalem to celebrate at the temple. (The other two are Passover and Sukkot.) This is why, as described in Acts, there were so many foreigners speaking so many different languages milling about in the streets.

There is a symbolic connection between the Christian and Jewish versions of this holy day, too. Jewish tradition holds that on Shavuot, God gave the Jews the Torah, the Law, and they became a nation. Christians consider the coming of the Holy Spirit and the subsequent preaching on Pentecost (Acts says that 3,000 were baptized that day) to be the beginning of the Christian Church.

Since Holy Week originally overlapped with Passover, Pentecost and Shavuot, which are 50 days later, would too except that the Jewish and Christian customs for when Easter and Passover occur, though both based on the lunar cycle, do not always agree. This year, however, they do overlap. Pentecost is on May 27 and Shavuot falls on May 26 – 28.

Many food customs exist for Pentecost and Shavuot, all of them more playful than meaningful. In Judaism, there are foods made of wheat and dairy, celebrating the first wheat harvest. In the Christian world, usually there are nods to representation of the Holy Spirit as flames — so often food that is red or spicy. I’m making Thai red curry with red bell peppers and cherry tomatoes. What are you doing to celebrate Pentecost, or Shavuot, this year?