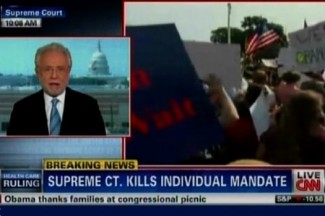 Very few things are actually important to know in real time. Some things are fun to know in real time, like watching live sports or reality show results episodes, but it is rare that our knowing something sooner makes a difference. There’s a very long but fascinating post on SCOTUSblog about CNN’s fumbling of reporting on the Supreme Court decision concerning the Affordable Care Act. In it, SCOTUSblog publisher Tom Goldstein says CNN (and for a shorter time, Fox) got the result exactly wrong, stating definitively that the mandate and bill were dead, because of three things. Two — lack emergency procedures and not trusting reliable sources — involve process, but the third is interesting:

treating the decision as a breathless ‘breaking news’ event, despite the fact that everyone knew when the opinion was going to be released

CNN’s treatment of everything as breathless reportage of breaking news is an SNL parody staple. It does so to a point so far beyond absurdity that it is not funny at all. I don’t know if there is a direct correlation, but it seems to me this trend accelerated with the elevation of Wolf Blitzer to its key anchor slot. Blitzer has only one way of talking: he punches out every phrase as if he’s still under artillery fire in the first Gulf War — maybe he’s stuck in that mode because it was his big break. I find it painful to listen to. Combine this with his nearly complete lack of quick comprehension, and one finds him again and again plodding through urgent sentence after urgent sentence about trivialities.

The other half of this equation is the obsession with not just knowing, but knowing before anyone else. I recall a particularly absurd incident earlier this year during a primary. Throughout the night, CNN kept updating the official numbers with numbers reported live from polling places. Blitzer’s repeated bragging that they had the best information was confounded by their math errors and by the fact that often everyone had the same numbers. This culminated when CNN tracked down the captain of a decisive precinct who had long ago delivered her results and gone home to bed, and Wolf woke her up and got her to read the numbers over the phone on live TV.

It made no difference whether we learned of the Supreme Court health care ruling at 10:08 that morning, or 10:30, or the next day… unless we were day traders gaming the hospital stocks.

He would not shut up about the exclusiveness of this information and the awesomeness of CNN. Ever heard what they say about bragging and overcompensating?

For me, issues of governance and politics are fun. I was watching both those events in real time, but I knew I was doing so because I enjoyed it, not because it mattered. Most things can wait until the next day’s morning paper, or until you hear about them through secondary sources.

This is part of the noise that surrounds us nowadays. I’ve said repeatedly and strongly that you should never watch local news. I say almost as strongly that you need not give a half hour or hour every single day to national news. You will be better served by meditating or exercising for that time — or if you’re stuck in a car, listening to books on tape or interesting lectures.

False urgency is the key to high-pressure sales. The salesman or advertiser tries to create a sense that if you, the consumer, don’t buy right now, the result will be catastrophic. At minimum, you’ll miss a great deal and will kick yourself for it later. At a higher-pressure level, they might suggest you will fall behind, lose standing among your peers, or literally be unsafe physically, or worse yet, that your inaction will cause your family to be unsafe. All of this is to get you to buy their product. Because the solid truth, known throughout the sales world, is that if you say “I’ll think about it” and walk away, you probably won’t buy, or you’ll buy in a more prudent and thoughtful way from a cheaper or more reliable source.

And that brings us back to the news. Because a large part of what’s wrong with the news is that it has become a product. And spirituality is a product. And environmental protection is a product. And candidates are products. Marketing has taken over the conversation. And since oftentimes the medium really does end up being the message, all these things are pushed at us using marketing tactics. Which means, among other things, trying to convince us that each of them is life and death and requires our immediate attention. Let’s put this stuff in perspective and remember that very few things are that urgent. Next time, instead of reading a headline and 200-word blast, pore over an in-depth piece on a subject and take the time to understand, even if that takes days. The universe can wait.

I know not everyone agrees with me on this one. Especially when it comes to a topic they really care about. What do you think?