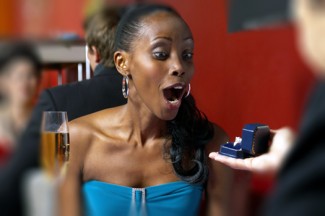 I’ve been thoroughly frustrated lately with our culture’s view of marriage and how the whole thing is supposed to work — namely, the lead up to day one. Despite society’s desire to step away from a “traditional” definition of marriage we tend to cling to traditions that reinforce stereotypical gender roles, or most concerningly, take away the significance of marriage. Some of these traditions are rooted in religion and patriarchal histories yet have imbued the secular world as “musts” in any wedding story.

Many of my friends are getting engaged or married so I’ve been hearing a lot about how the proposal happened or what the plans are for the wedding day. What’s come into my view however are breaks to the cliché approaches to marriage. But let’s first examine what tends to be “normal” as told in the movies: Guy and girl meet and fall in love. Then the guy has commitment issues so the girl tries to figure out when he might propose. After all, it’s been X years and that’s the “right time,” right? Finally, the guy proposes in a fantastical way, gives the girl a ring worth at least three months his salary, and then the next six months are spent planning six hours of a single day, the wedding day. And then life goes on, celebration over.

I always like to tell the story of when I worked at Walt Disney World where I witnessed three proposals. Yes, they were beautiful moments of love expressed. But all three of them had the same format: the guy on his knee slipping a ring on the girl’s finger. That’s what we’re used to because that’s what we’ve been told is supposed to happen.

There’s a good scene in the movie “Runaway Bride.” Julia Roberts’ character Maggie is showing Richard Gere’s character Ike the rings she’s received from her various former fiancés. After she shares a couple stories of their “romantic” proposals in ballparks and butterfly farms, Ike says, “You know, if you gotta dress it up like that it doesn’t ring true.” At the end of the film we see Maggie propose to Ike. Quite the break of tradition.

I have two friends who also broke tradition and proposed to each other. But before that, she insisted that he not give her a ring. She didn’t even want to take his surname because she felt it reaffirmed centuries of male dominance and patriarchy. Some may roll their eyes at this and say, “Come on! It’s just a sweet tradition!” Others may say it’s too easy to excuse inequality with tradition. So what did my friends do? They added the other’s surname to their names (no hyphen) giving them each four names.

Movies reinforce the need for a surprise. And who doesn’t like a surprise? But avoiding a real discussion and discernment for a fairy tale surprise does nothing to help ensure a healthy marriage.

Dating is a time that’s meant for the couple to discern whether or not to marry each other. Unfortunately, many women hold to two expectations: first, that the man be the one proposing and second, that it be a complete surprise. The other day my girlfriend and I were speaking to a friend who was asking when a woman would know when her boyfriend might propose. Well, we said, hopefully they’d have talked about and discussed marriage beforehand. She responded, “So like you’d want to subtly hint…?” We were baffled that someone would want to be proposed to when she had barely talked with her boyfriend about marriage. “Well, no, you’d want to speak openly and directly about getting married,” I responded. “But then it wouldn’t be a surprise,” she said.

Movies reinforce the need for a surprise. And who doesn’t like a surprise? But avoiding a real discussion and discernment for a fairy tale surprise does nothing to help ensure a healthy marriage. Marriage should be entered maturely and intentionally. The couple should be discussing, praying, and reflecting on their relationship experience and their hopes. They should be asking themselves, “Is God calling me to marry this person?” Relationships don’t fall apart just because of a lack of communication, but also because of a lack of prior discernment.

The Internet is filled with advice columns with titles like “When Will He Propose?” and “Will He Ever Marry You?” There are even quizzes that will predict whether or not your man will pop the question. Shouldn’t you know that because you’ve talked about marriage? I wonder if marriage has become like another accessory for some — something to fantasize about in order to escape the challenges of real love. Some of the advice columns I found were actually redeeming, even encouraging the woman to propose (it’s the 21st century!) or telling women that if they’re looking for “signs” that their boyfriend might propose then they’re probably not ready for marriage.

The Roman Catholic and Eastern Orthodox traditions see marriage as a sacrament, that is, instituted by Christ and an “efficacious sign of grace.” Other denominations acknowledge marriage to be a covenant between the couple, ordained by God, and holy. That’s a big deal. There’s divinity and sacredness in love that’s ordained by God. Marriage is more than just a joining of two individuals who have the hots for each other. It’s more than just a fancy ceremony and reception. Marriage is a sacred bond with a genesis deeper than even a couple could express. It’s “sacramental” in that marriage is a real manifestation of God’s love.

When two people consider marriage, all walls should be demolished; all cards should be laid on the table; and deep, honest, prayerful discussion should begin. Vulnerability to each other, deep trust, permanent commitment, building up the other. Serious and mature discernment should lead a couple to a mutual decision to get married. And if they do, they should leap into it for a lifetime of joy and self-sacrifice with their beloved, not for a single day’s festivities. They still must celebrate in gratitude, with or without rings or live bands or fairy tale expectations. But the most important “must” in any wedding is the intentional and mutual discernment that leads to it.