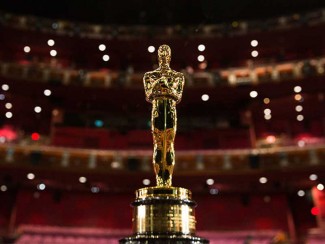 With the Oscars happening this weekend, we’re all focused on actors, movies, special effects, and snubs. Here at Busted Halo, we’ve been doing some nominating of our own. We’ve weeded through volumes of potentials and narrowed our list down to the six Catholic saints we think best characterize movie awards season.

Whether you’re swooning over a specific actor, loving the red carpet drama, or pulling for a complete lost cause, we’ve got you covered. Offer up a prayer, and you’ll know you did your part to support your favorites when the curtain rises at the Academy Awards. And the Oscar goes to …

Legend has it that in the 3rd century Genesius was entertaining Emperor Diocletian of Rome by acting out a play that satirized the Sacrament of Baptism when, ironically, in the middle of his performance he was suddenly converted to Christianity. Outraged, the emperor had him tortured, and, when he refused to worship the pagan idols, beheaded. Known primarily for being the patron saint of actors, Genesius also is the protector of torture victims, who, considering all of the Oscar campaigning and publicity that happens, may be one and the same.

In 258, when Lawrence was a deacon in the Church of Rome, the pagan Prefect of Rome was convinced the Church was hiding a great treasure, so he ordered Lawrence to bring it to him in three days. Lawrence spent that time gathering up all the poor and sick throughout the city and then brought them to the Prefect, stating, “This is the Church’s treasure!” Enraged, the Prefect condemned Lawrence to a long and painful death, tied to an iron grill over a slow fire. Retaining a strength and sense of irony that prospective screenwriters should take note of, Lawrence ensured his horrendous death would forever be remembered by cheerfully ad-libbing to his aggressors: “Turn me over. I’m done on this side!” Hopefully, Oscar host Jimmy Kimmel has quips equally as clever in his opening monologue (and inevitable musical number).

Vitus is known as the patron saint of dancers. In the Middle Ages, on St. Vitus’ feast day (June 15), people in countries including Germany and Latvia would celebrate by dancing before his statue. This dancing became very popular. Eventually, the name “Saint Vitus’ Dance” was applied to the neurological disorder Sydenham’s chorea, which is characterized by random bodily jerkings (also known as contemporary dance). Also known for protecting against oversleeping — among many other things — St. Vitus might be a handy saint to keep in the back pocket for any celebrity who might be worried about falling asleep during the ceremony.

One of Jesus’ original supporting characters, Jude is known as the patron saint of lost causes and desperate situations. This association came about because of a letter Jude wrote to the Churches of the East, in which he told them that the faithful must keep going, even in difficult circumstances. With those thoughts in mind, think of all those nominees with no wins — or those who haven’t even been nominated — and offer a prayer for them to St. Jude. Or better yet, it’s probably a good idea to pray for more diversity in the Academy’s nominations. Lost cause indeed!

With all the fashion triumphs and travesties we’re bound to see on the red carpet, it’s only right to give a shout-out to the patron saint of fashion design. St. Catherine was beheaded around 305 A.D. by Emperor Maximinus II. On her feast day (November 25), many countries still celebrate St. Catherine’s Day, albeit in different ways. In Britain, there are fireworks displays and “Cattern Cakes.” In Estonia, meanwhile, being that the day is mainly in honor of women, both genders may dress as women and go door-to-door collecting gifts. In other countries, people wear outrageous hats or make taffy. During the awards ceremonies this year, keep your eyes peeled for crazy outfits that would fit right in on St. Catherine’s Day!

Anyone hosting, attending, or in any way involved in an Oscars party might want to offer up a prayer to St. Bibiana to help get through the morning after. St. Bibiana is known as the patroness of hangovers, headaches, and other mental ailments. After her death, it was said that an herb grew over her grave that miraculously dispelled those aforementioned conditions. Ask Bibiana for a little help and maybe your “rough morning” won’t turn out so bad.