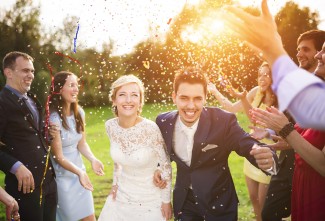 When my fiancé and I got engaged, I found out that in the wedding industry, they call spring “Bridal Christmas.” That’s because such a significant proportion of couples get engaged between Thanksgiving and New Year’s. Come March, they get down to wedding planning, and in the spring and summer, nearly 65 percent get married. A spending bonanza has begun.

The U.S. wedding industry — or the bridal-industrial complex, as some call it — is now estimated at $50.6 billion. Magazines, websites, bakers, caterers, stationers, dressmakers, florists, photographers, videographers, bands, DJs, limo drivers, restaurants, reception halls and hotels are just a few of the businesses that get a piece of the action.

And the amount of time spent arranging all those logistics is so significant that engaged couples should be able to list it on their résumés under “event planning” and “project management.”

If you’re nodding your head in agreement, consider taking a timeout. A wedding is one day. A marriage that reached its golden anniversary would last 18,262 days. How about a little less preparation for Day 1 and a little more preparation for the thousands of days after?

RELATED: Why I Can’t Have My Dog In My Wedding

For our own wedding, we agonized about the ceremony, guest list, music, food, flowers, and every other logistic you could imagine. So three months before the big day, I decided to step back from getting ready for the wedding to get ready for the marriage. That meant taking a marriage prep course, gathering advice from married friends, and reading Timothy Keller’s excellent new book The Meaning of Marriage. Here are some of the tips we took to heart.

RELATED: How Does One Pick Bible Readings for a Catholic Wedding

When it comes to marriage prep, not all the conversations you have will be a blast, but setting the right tone from the start can save years of strife down the line. Wishing you a long and happy marriage!