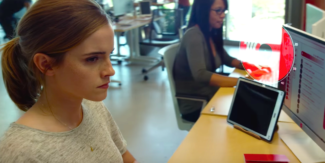 Think for a moment about your average day online. Research says Americans spend an average of 12 hours and seven minutes per day consuming various media, with a full six hours of that devoted solely to the internet. Now think about all of the apps you have and the websites you visit — Facebook, Twitter, Amazon, Gmail, PayPal, Google — and just how connected each of these experiences is to all of the others. When you take a step back, how much of your information is really out there in the digital world — and who has access to it?

“The Circle,” which hit theaters last Friday, takes a troubling look behind the screen to shed light on just how trusting we can be when it comes to putting our information out on the web. In the movie, based on John Eggers’ novel of the same name, Emma Watson plays Mae Holland, a 20-something struggling to find a steady job until she’s granted the opportunity of a lifetime: a position with technology giant The Circle (a social network/app that’s meant to combine the most alluring elements of real-life tech companies like Apple, Facebook, and Google). But when Mae begins to work at The Circle, she finds out that the company’s intentions may not be as innocuous as they seem. The Circle aims for total access to people’s lives, looking to make everything from e-mail communications to private meetings 100% accessible for anyone who has any interest in this information, while simultaneously advancing the control that The Circle has over its users. As Steve Jobs analogue Eamon Bailey (Tom Hanks) states: “Knowing is good, but knowing everything is better.”

In this regard, however, The Circle overextends its reach and crosses a moral line, breaching its users’ trust. After all, it’s not an unreasonable expectation to assume a certain degree of privacy when posting online or going about one’s daily life. Yet The Circle, and Bailey, in particular, don’t want their followers to feel this way. They brand any attempt at privacy as “keeping secrets” and advocate the idea that the world would be much better without people trying to hide things from one another. The movie explores the idea of privacy online: Is it a foregone conclusion or can the expectation of privacy be eroded in the digital world?

Yet perhaps the most disconcerting element of “The Circle” is not just the way that the titular company and app push into the lives of their users, but more how willing and compliant people are with these advancements. Throughout the film, I kept anticipating and hoping for the turning point where anyone — Mae in particular, as the protagonist — would essentially “wake up” and realize The Circle was stripping away liberties as it pushed for greater and greater “transparency” from its users. But even in the wake of a shocking tragedy that is publicly broadcast on The Circle (particularly disturbing given the horrors recently proliferated on Facebook Live), the public’s trust of the company did not greatly waiver — an alarming parallel to reality.

There’s an adage I’m sure you’ve heard that says a frog will remain in a pot of boiling water until it’s cooked alive, as long as you gradually turn up the heat. It’s meant to warn people about being complacent as danger creeps into our lives, and “The Circle” is the perfect example of a situation where any of us could be the frog. We’re living in an age where more and more is expected of us to fuel our digital experience; with the amount of time spent interacting and engaging others through the digital world constantly growing, it’s easy to feel left out if we’re not up to date on the latest tech advancements and social media trends. The balance between staying current and maintaining your privacy is sometimes a difficult one to mete out. While “The Circle” is a fantasy piece about the dangers that could be, it’s also a warning about the dangers that are already here. It’s a film that definitely raises questions for its viewers — and if you take them to heart, you may think a little bit differently the next time you pull out your phone and go online.