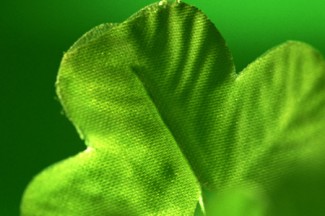 Having graduated from Notre Dame, I’ve spent years sporting shirts that say: Go Irish! I have proudly flown their flag, I love Irish dance, and I appreciate a stout Irish ale. I don’t know much, though, about real Irish culture. One year, I took a bus with a friend to Chicago. We arrived to find the city packed with people who were covered head to toe in green. It was St. Patrick’s Day.

If you’ve never seen the Chicago St. Patrick’s Day parade, it is something to behold. People are decked out in green wigs, green beads, green face paint, green everything. They even dye the Chicago River green for the occasion. My friend and I ducked into a pub to enjoy a nice green beer as we sat and watched people stumble toward the parade route. I am sure that the parade-goers we were watching had started their day at 7 a.m. with a power hour, toasting each drink to St. Patrick.

This year, I finally decided to get an answer to the question: How do the Irish celebrate St. Patrick’s Day? Our friend Martin Fogarty was kind enough to let me interrogate him about Irish customs. He is from Ireland and moved to the United States after getting married. Martin even ran a pub for quite a while in Ireland. (If you read the interview with an Irish accent it makes it much better.)

Vanessa: So tell me, Martin, about the events on St. Patrick’s Day.
Martin: If there is one American holiday that I would liken St. Patrick’s Day, it is Thanksgiving. St. Patrick’s Day is a family holiday. All the schools and businesses close. We all wake up early to go to Mass (it’s a holy day of obligation in Ireland), which is immediately followed by a parade. Each town, no matter how small, has a parade. The small ones will have tractors and the school marching band, but the bigger towns will have floats and all. If you were lucky, you could catch your town’s parade and rush to the bigger towns’ to catch theirs as well. Then we would all come home to a big traditional Irish lunch. After that, the whole family would go to the local pub, which is different from what you imagine a bar to be. Very family-friendly. The family would spend the rest of the day at the pub listening to bands and watching the Club Championship for hurling. There is definitely drinking in the pubs when everyone is together, but it is not to the extreme like I see here.
V: What is a traditional Irish meal you would eat on St. Patrick’s Day?
M: Bacon and cabbage stew and bacon and turnips. But with boiled bacon, not what we’re used to here in America. I make a traditional Irish breakfast for my kids of Rashers, black and white pudding, Irish sausage, chips, and chocolate from Ireland. [Ironically enough, Martin can find all of this traditional Irish food at Fiesta.]
V: Do you deck yourselves out in green?
M: Not like you all do here. I mean, I don’t mind if someone wants to paint their body green and wear a green wig, but no one does that back home. The young kids would get to wear badges. These are ribbons with shamrocks and a harp glued to it. Everyone else would buy a shamrock bunch from the grocery store and pin it to their shirts. The bigger the bunch, the more Catholic you are. You go to church and people have fields on their chests. But that is about as far as we would go with the green. We don’t wear green clothes or anything.
V: What are some traditions that happen in the home?
M: Every family will have a statue of St. Patrick and probably also a picture of the pope. We also retell the story of the shamrock and how St. Patrick used it to explain the Trinity. He held up a shamrock and explained that while there are three distinct leaves it is still a single plant. That is how the Trinity is with three separate and distinct persons but one God.
V: Have you seen the holiday change over the years?
M: Yes, it is getting a little more commercial each year. And while the churches may be empty on a regular Sunday, they are still as packed on St. Patrick’s Day as they would be for Christmas or Easter.
V: And for some of the most important questions: Do they dye their beer green in Ireland and do the Irish actually like the “Fighting Irish”?
M: No. Don’t ever hand me a green beer. That’s awful. I think if you dyed beer green in Ireland, they’d punch you. Hah. And yes, a lot of people follow Notre Dame. While many teams are trying to distance themselves from the ethnic names like the Seminoles or Redskins, we Irish, we’re proud to be Notre Dame’s tagline, “Fighting Irish.”

After I spoke with Martin, I was inspired to read up on St. Patrick. Here are few things you probably never knew: