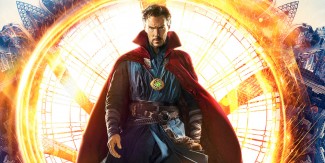 “Doctor Strange,” the latest in Marvel Studios’ string of superhero smash hits, takes a more intimate and small-scale approach to storytelling than its high-octane counterparts from years past. The film explores the depths of emotion and values of Dr. Stephen Strange (Benedict Cumberbatch) in a much more personal way than traditional comic book cinema.

The story of Dr. Strange is not superhero grandiose. He’s a neurosurgeon struggling to reconstruct his life after losing the ability to properly use his hands, a crippling blow to his career and his ego.

The film provides a real sense of Strange’s loss and hopelessness and allows the audience to feel the despair he experiences as his once cushy life crumbles around him. Strange tries in vain to utilize experimental procedures, physical therapy, and everything else his gifted mind can concoct in order to heal his broken hands and shattered confidence. Only when he’s at his wits’ end does he discover the solution that he needs.

It’s not one of traditional medicine and surgery, but of faith and spiritual reconciling in the form of Kamar-Taj, a place of mystical learning in Kathmandu. Here, Strange meets The Ancient One (Tilda Swinton), a wise woman of faith and discipline who challenges Strange’s position as a man of science, offering him the opportunity to see the world differently. The Ancient One promises Strange that by accepting his role in the universe and surrendering to spiritual forces that are more powerful than him and beyond his control, he will achieve not only a greater understanding of his purpose, but also the cure he so desperately seeks. This, of course, proves a great challenge to the vain doctor, who not only refuses to believe in the potential efficacy of this method, but also remains so driven toward fixing his hands and returning to his life of glory and leisure that he cannot focus on the humility, discipline, and calmness his healing truly requires.

The highlight of “Doctor Strange” is its visual effects. Throughout the course of Strange’s sorcery training, the movie engages the audience in his spiritual journey in a unique way, utilizing special effects that are nothing short of psychedelic to warp reality and demonstrate some of the more intangible effects that Strange’s magic has on the world (and the effects that learning this magic has on Strange himself). These visuals are particularly stunning during a fight sequence in New York that puts Strange in direct conflict with the villainous Kaecilius. The two bend walls, flip gravity, and twist skyscrapers at each other, producing a breathtaking kaleidoscope.

Around the time of this battle, it becomes clear that the teachings of Kamar-Taj may not be as morally up-and-up as we (and Strange himself) have been led to believe. Strange’s dilemma — and that of the moviegoer experiencing this world alongside him — boils down to a simple question. Should a person do something that is otherwise wrong for the advancement of the “greater good”? It’s a tough question and one that “Doctor Strange” explores.

“Doctor Strange” is, at its core, about accepting what it means to be human — letting go and understanding that you can’t always be in control of the big picture, only your part of it. As The Ancient One tells Dr. Strange, “The simplest and most significant lesson of all [is:] it’s not about you.” The film centers on Stephen Strange’s spiritual journey and personal development from a perspective that ultimately relied on Strange humbling himself and making a change to the way he views the world. In order to succeed, he discovers that he must accept his limits and put others ahead of himself — a stark contrast to the egotistic and smarmy surgeon we met at the beginning of the movie. Unlike so many cliche, destruction-ridden superhero flicks where the hero punches through his problems, “Doctor Strange” challenges its hero — and its viewers — to see the larger picture instead and maybe learn a thing or two about humility along the way.