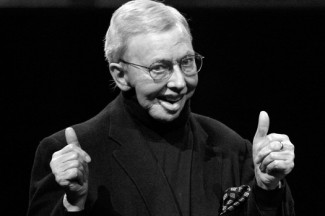 Many figures in pop culture are simply blips on our radar — people we acknowledge for a moment and then forget about. A select few, however, rise above the rest and take on the status of heroes. For me, Roger Ebert is in the latter category.

I discovered Ebert as an impressionable 10-year-old, already dazzled by the magic of the movies. Watching him debate the merits of new films with his partner, Richard Roeper, on “Ebert & Roeper,” I gained a deeper understanding of how movies were made and how to think critically about them.

With the advent of YouTube, I was able to watch classic clips of Ebert and his original foil, Gene Siskel, discussing the movies of the 1980s and 1990s. This enabled me to discover great films that I would not otherwise have known about, and it also showed me some stinkers to avoid (Siskel and Ebert’s panning of Rob Reiner’s North has become the stuff of legend).

Finally, with the advent of rogerebert.com, I was able to read Ebert’s entire body of written work from his 46 years as the film critic of the Chicago Sun-Times.  Ebert was one of the best writers about the movies, and reading any one of his pieces shows why. (His rave review of Fargo is a good example.)  His encyclopedic knowledge and command of language were second to none.  He was a pioneer in making film criticism accessible, and his work inspires me to continue to hone my craft.

Ebert transitioned from simple writing idol to full-on hero during his brave battle with cancer. During treatment for salivary gland cancer in 2006, part of his jaw was removed, making it impossible for him to speak.  He had to leave “Ebert & Roeper,” and many people, including me, thought he would not be able to recover.

Roger Ebert was a pioneer in making film criticism accessible, and his work inspires me to continue to hone my craft. He transitioned from simple writing idol to full-on hero during his brave battle with cancer.

He did, however, and in the process found a new creative outlet.  Even though he could not speak (save for a computer voice he used on several occasions), he made the internet his voice. Ebert continued to publish reviews in the Sun-Times and on his website. He also started a blog about not only the movies, but also his everyday life.  He continued the conversation on his Facebook and Twitter feeds (still active and now run by his wife and website contributors).

Among the many things he discussed on these online platforms was religion. Ebert, while not subscribing to a particular belief system, was a very spiritual man. Though a lapsed Catholic, he had a deep respect for the nuns who had taught him in his youth. After his illness, his writing began to have a more philosophical bent as he reflected on life and its end. He collected his musings on death in a 2009 blog post that begins:

I know it is coming, and I do not fear it, because I believe there is nothing on the other side of death to fear. I hope to be spared as much pain as possible on the approach path. I was perfectly content before I was born, and I think of death as the same state.

This worldview may not be drawn from any particular belief system, but it shows that Ebert realized and appreciated the things he could not control. His sickness, while obviously an awful burden, caused him to start using a new, more introspective writing style that is both pleasurable and educational to read.

As a film critic and philosopher, Roger Ebert continually wrote brilliant movie reviews over four decades while using his influence to become an inspirational teacher. I give him “two thumbs up!”