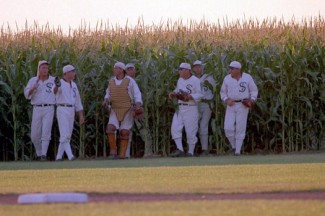 This is perhaps the most famous line of the movie Field of Dreams, which is celebrating its 25th anniversary this year. With summer upon us and America’s favorite pastime in full swing, I have been reflecting on the movie’s deeper meaning for my spiritual life today.

Ray Kinsella, an Iowa farmer, hears a voice in his cornfield: “If you build it, he will come.” Ray has a vision of a baseball field on his farm that will host the ghosts of Shoeless Joe Jackson and seven other Chicago White Sox players who were banned from baseball in 1919 after throwing the World Series. Despite nearly losing his farm, Ray goes ahead and builds the baseball field. He receives other messages that lead him to meet author Terence Mann and then the baseball player, Archibald “Moonlight” Graham, who never made it to bat in his one game with the New York Giants in 1922. Ray realizes in the end that he was thinking about the messages all wrong because the “he” being referred to was actually the ghost of his father. I think if Ray hadn’t answered the call in the way he did, finding support from his family and even complete strangers along the way, he would have never ended up where he did  — reconciling with his dad over a game of catch.

In my own spiritual life, I am learning to trust that I am called by God for something God has in store for me, and that I am where I need to be at the moment. In June 2005, just two weeks after joining a convent and professing First Vows in Omaha, Nebraska, my community sent me to Portland, Oregon, to live with the sisters there. Having never lived more than 20 minutes away from home in Nebraska, I was afraid it would be too difficult to live 1,600 miles from my family.

I was afraid it would be too difficult to live 1,600 miles from my family. A friend told me to reflect on the song “Be Not Afraid.” The line that struck me most was, “Be not afraid, I go before you always” … I knew God was with me in Omaha, and it helped to believe God would be present in Portland or wherever I ended up in my life.

A friend told me to reflect on the song “Be Not Afraid.” The line that struck me most was, “Be not afraid, I go before you always…” I could picture God already in Portland, putting people in my path who would become my friends and help me through the difficult times I would encounter. I knew God was with me in Omaha, and it helped to believe God would be present in Portland or wherever I ended up in my life.

Looking back, I thought God was calling me to be a nun. That was my field of dreams. Unfortunately, it turned out in to be a barren desert for me, but if I had not followed that initial call, I would have never ended up pursuing my current dream of working on my MFA in creative writing. While exploring my call to be a nun, writing became even more important to me as a way of finding my voice in the world. I pursued the opportunity to write reflections and prayers and was given the chance to write for the magazine which was published where I worked. Each publication, and subsequent joy, I experienced helped me to see that God had given me a talent for writing and that I needed to share it with others.

It’s not always easy to understand what God is calling you to do. In the movie, Ray’s wife, Annie, poses a fitting question as a way of trying to understand her husband’s vision and voice: “If you build what, who will come?” I find myself asking Annie’s question on a regular basis. I ask God for clues in prayer. What do you want me to do? Where do you want me to go?

Perhaps I need to be more aware of those around me. Annie supported her husband, even amidst the foolishness of mowing down their livelihood for a baseball field. We can go so much further with our dreams if we have someone to support us and help us talk through the challenges and struggles that may accompany them. When I dreamed of becoming a nun, my family and friends supported me through the process and celebrated when I entered the Novitiate and took my First Vows. They supported me just as much when I left the convent and tried to build my life anew. Now I can see that I shouldn’t be shy or afraid to pursue new dreams when others don’t work out. If I receive a hint as to what my next dream may be, I know I can follow it with courage because God has already gone before me, placing supportive people in my path and making fertile ground for my field of dreams.