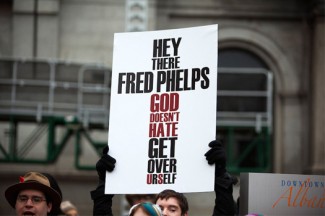 I am not proud of this.

If you don’t know, Fred Phelps was the founder of the infamous Westboro Baptist Church, known for its protests of military funerals and its virulent homophobia. Church members, mostly Phelps’ own relatives, celebrated the deaths of American soldiers as acts of divine retribution. They touted signs proclaiming “God Hates Fags” and “Thank God for 9/11.” The WBC has made hateful statements about not only homosexuals, but Catholics, Muslims, Hindus, Jews, and various Protestant denominations.

So it isn’t surprising that Phelps’ death has triggered some self-righteousness — even glee. In what’s probably one of the most brazen examples, a band chose to commemorate the occasion with “Good riddance” T-shirts. More common, I imagine, are reactions like my own — quiet stabs of schadenfreude.

Let’s be clear about who Phelps was and what he represented. He was a disturbed and evil man who made it his business to spread misery, who did not deserve the attention his toxic spewings attracted for him.

How do you love a person like that? Because apparently that’s what we’re supposed to do.

In a perfect world, I suppose, no one would know about the WBC. We would all collectively ignore them. Since, for better or for worse, we haven’t done that (and maybe it’s just as well; it would be a shame if Phelps’ victims interpreted our silence as indifference to their suffering) we have a delicate balance to strike. Part of loving a person is not allowing that person to persist in sin unchallenged. We have to be clear that hatred is unacceptable. We also have to love and respect Phelps and his ilk as human beings created in the image and likeness of God, however warped by anger or ignorance. To that end, immediately following Phelps’ death, counter-protestors arrived at a WBC protest with signs reading, “Sorry for your loss.”

I guess it’s natural to hate the hateful. Even as I type these words I’m filled with doubt. How can I advocate love for Fred Phelps? How is that fair to his victims? Where’s the justice in that? Besides, isn’t there something condescending in the notion of forgiving him? Maybe hating him shows more respect for him and his autonomous though deplorable choices.

At the same time I ask myself: does the world really need more venom and snark? Condescending or not, there is something pitiable about a person who makes an ugly waste of his life as Phelps did. And so, with teeth gritted, I pray for the repose of his soul and the comfort of his family, a miniscule gesture, though it still takes effort. I persist in that prayer through the whispering of my doubts, telling me that this prayer is just another flavor of self-righteousness I’m indulging in, that I haven’t loved this man in any substantial way, that I’m wasting thought and energy that would be better spent elsewhere, all of which may be true, but still, this is the best I can manage: this quiet prayer wrenching itself from a swamp of rancor, and the resolution to meet and challenge hatred but never to return it in kind.

“Love your enemies.” The phrase is deceptively simple, and so familiar to us that the charge might sound easy. It’s not easy, especially for those whom Phelps hurt personally. But what’s the alternative?

Phelps was wrong: God hates no one. Neither should we.