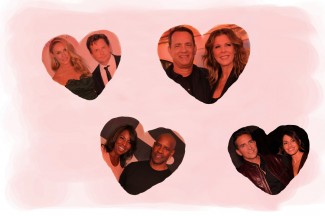 Call me a hopeless romantic, but I like to think that all is not lost when it comes to making a marriage last in today’s world – even in Hollywood. When you think about celebrity couples, you might immediately think: affairs, divorce, “conscious uncoupling.” But there are plenty of examples of Hollywood marriages that do last, despite the fact that with fame, time apart and lots of interest from the opposite sex, it can be hard to keep a marriage strong. Every marriage has the pressures of work, family and finances, however, so no matter what you do for a living, or how many people know your name, here are some simple principles — exemplified by your favorite celebrities — to help keep your marriage strong.

Staying connected is relatively easy in the first stages of a relationship. It’s what romance is all about — holding hands, doing things together, talking about your dreams. But as time passes, it’s easy to get comfortable. Staying connected means checking in with your partner emotionally, and then taking time to listen. Tom Hanks and Rita Wilson have been married for 25 years, and she credits the practice of Tom sending her notes during the day and pictures from his phone of what he’s doing with helping them stay connected. But even for those spouses who see each other every day, it’s easy to become absorbed in work, social commitments or the latest crisis. Making a specific time to spend together, like a scheduled date night, not only shows your spouse that you care, but also helps to focus the two of you back on your marriage. Staying connected in the big ways and small is one habit that helps to hold a marriage together.

It seems as if this one is obvious. But the true meaning of commitment is much more than saying your vows on cue during your million-dollar, live-televised ceremony. It’s living out the “I am staying no matter what” part. That means staying in your marriage even when you don’t “feel” in love. It means staying in your marriage even when you don’t “like” the other person that week, or month or year. Most couples can’t imagine themselves ever getting to that place, but sadly the seven-year itch does exist. Commitment does not mean staying in an abusive marriage, and the intent is to avoid a loveless marriage, too. Commitment means both of you working at keeping it good, and when needed, working at making it better. You commit to working on the conflicts, and consciously pulling each other back together when the stresses of life move you towards drifting apart.

As we know, infidelity is crippling to a marriage; but let’s not forget the more subtle while equally important practice of emotional chastity with others. This means abstaining from expressing your emotional needs with anyone else other than your spouse. It means you don’t go to coffee with that cute new employee. Why not? Because you are married.

As Michael J. Fox commented about his 25 years together with Tracy Pollan, “marriage has its ups and downs.” That’s an understatement for this couple! When Michael was 29, after only two years of marriage, he was diagnosed with Parkinson’s diesease. At the time, Michael was one of the hottest actors in Hollywood, and I can imagine Tracy may have been expecting a lifestyle that didn’t include being a caretaker for a young husband with a debilitating disease. But she didn’t leave, and neither did he. As Michael told Oprah Magazine in 2002, “When we married, we married … and we planned to stay married.” For better or worse. You don’t leave your partner during the down time, even if that “time” lasts much longer than you want. It’s about believing in something more important than your own needs, while at the same time having the confidence that your partner is willing to sacrifice for you.

Fidelity (aka chastity for married folks)

Remaining faithful to your marriage is another one of those obvious principles. Without fidelity and trust, there is no foundation for marriage. It’s the challenge of living the value of chastity, even within marriage. But why is it so hard to do? The classic definition of chastity within marriage means abstaining from sex with your spouse at times, for reasons of illness or pregnancy. But the practice of chastity also provides the training ground for faithfulness. Chastity within marriage, or fidelity, also means abstaining from having sex with anyone other than your spouse. Pauletta Washington credits her 32-year marriage to Denzel Washington to the knowledge that “he’s coming home to me” even though he’s a sex symbol. She attributes the stability in their marriage to transcending “passion and lust.” There is a deeper bond with this couple, a bond that goes beyond the physical realm and its temptations. As we know, infidelity is crippling to a marriage; but let’s not forget the more subtle while equally important practice of emotional chastity with others. This means abstaining from expressing your emotional needs with anyone else other than your spouse. It means you don’t go to coffee with that cute new employee. Why not? Because you are married. In fact, lots of affairs start as casual friendships; but even if there is no sexual contact, emotional affairs are just as damaging as sexual ones. Every person is in need of friendship; simply find a relationship that doesn’t have the potential for betraying the intimacy of your marriage.

Although there are many celebrities who report being Catholic (Katie Holmes, Nicole Kidman, Bradley Cooper, Mark Wahlberg and Alexis Bledel to name a few), it’s a bit more difficult to find a truly Catholic couple. Probably best know for openly sharing and living his faith is Jim Cavielzel, the actor made famous by his portrayal of Jesus in The Passion of the Christ. He married his wife Kerri Browitt in 1996, and they have three adopted children. They both are outspoken supporters of Catholic values and have suffered some persecution for it. After 18 years of marriage, they are passionate about their faith and continue to live their values. It can’t be an easy path, living in a way that is countercultural to the Hollywood scene, but it is one that holds up a beautiful example of a Catholic marriage forged through connectedness, commitment, fidelity and living a life of faith.