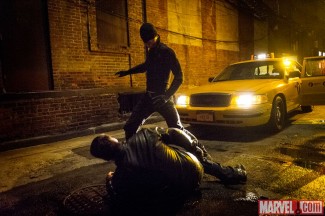 When we first meet the title character of the Netflix series “Daredevil,” he’s filled with quiet confidence. Sitting in a confessional, the visually impaired superhero tells his priest about how his father, a fighter, could take a punch and come back more fearless and unstoppable than before. Daredevil talks about his father having the devil in him, and hints at what’s going to happen when he lets his own devil out.

“I’m not seeking penance for what I’ve done, Father,” Daredevil says. “I’m asking forgiveness for what I’m about to do.”

That confidence doesn’t last for long.

Like many comic book tales, Daredevil examines the fight between good and evil in broad strokes. But what separates it from other stories of masked heroes is the conflict inside Daredevil about what he believes he must do to fight evil. The show asks a rather thorny question about the lengths Daredevil will go to protect the innocent, one that is particularly important for people of faith who want a better world:

How far is too far?

Daredevil developed a moral imperative to fight crime — and more broadly, evil — after a terrible accident blinded him but heightened his other senses.

While the series –which began its second season March 18 — excels at pulpy comic book action, it also dives deeper into the collision between Daredevil’s Catholic faith and the world around him, which is defined by the perceived necessity of violence. Between the rampant crime and the almost uniformly corrupt police and politicians, it’s a grim, grim place to live. Daredevil (played with arresting physicality by Charlie Cox) spends a lot of time beating up bad guys in an effort to stop them from hurting people.

At first, his brutality can appear justified against the background of his world. Of course he needs to beat up all those people — how else is he going to stop thugs and murderers and keep his arch-nemesis Kingpin from taking over the city? Someone has to stop them, whatever the cost.

As the first season moves ahead, though, that single-minded conviction to fight the bad guys becomes more complicated. When we later see Daredevil talking with his priest, he’s tormented about whether to kill Kingpin. But in doing so, he creates a false belief that he must either kill the Kingpin or stand by as the city is destroyed.

His priest tries to show him the flaw in his thinking. “Another man’s evil does not make you good,” the priest says. “Men have used the atrocities of their enemies to justify their own throughout history.”

Daredevil relents momentarily, but he loses the lesson soon after. Later in the episode, he’s drawn into a trap and nearly loses his life at the hands of Kingpin and his associates. In that moment, Daredevil understands his error, but it comes with great cost.

It can be easy for us to consider the show only as entertainment, but “Daredevil” offers people of faith an opportunity to reevaluate how we respond when we see violence, hatred and injustice in our world. To discern whether we allow our base instincts to drive our response, or if we seek a more considered answer.

Our world is far murkier than Daredevil’s Hell’s Kitchen. But even in his world, Daredevil wrestles with the morality of what he believes he must do for good. Even in victory, he feels the full moral and physical costs of his actions.

In this way, Daredevil is not a superhero story as much as it is a cautionary tale of what can happen when good people believe they must do bad things, and where and how they draw that line. There are several moments when Daredevil appears to come even closer to becoming the evil he fights against, the moment when his horned suit begins to represent what he is on the inside rather than the symbol he wants to project to the world.

As one character says, Daredevil understands that “there are some roads you can’t come back from.” But he may not always make the choices necessary to keep him from that dark path. He may have abilities that make him a superhero, but it is in his mistakes and misjudgements that allow the rest of us to understand and connect with his humanity.

We may never need to make choices like Daredevil, but when we consider how we respond to the ugliness and sadness this world can create, it never hurts to think about which side of the line we want to be on.