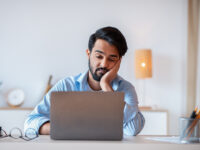 This past New Year’s Eve, I decided it would be helpful to compose a year-in-review post for my personal blog detailing my accomplishments as a freelancer in 2021. I was initially pleased with the overview, because the list of achievements seemed impressive: I had 32 articles published (one of which was spotlighted by an influential Catholic publication and later appeared anthologized in book form), I helped to edit two comic book issues, and I appeared as a guest on five podcasts! This all followed my decision to pursue my dream of being a creative writer back in 2020 when my internship as a lab assistant in a natural history museum ended abruptly during the height of the pandemic. My leap of faith appeared to have paid off, and on the surface I seemed to have much to be grateful for. But instead, my satisfaction quickly gave way to depression and disappointment.

When I compared myself to other writers I knew who seemed, from my vantage point, far more successful and prolific, I felt like a failure. I began to wallow in self-pity and resentment: I had worked so hard for nearly two years! Why wasn’t I more successful? Why didn’t more people appreciate and recognize my work?

RELATED: What Does It Mean to Be Content? A Reflection on Appreciating What I Have

At around this time, my mom recommended that I read Fr. Robert Spitzer’s book “Finding True Happiness.” I dove right in, and soon found that Fr. Spitzer understood exactly the kind of emotional whirlwind I was going through. Because many of us tend to classify ourselves and our peers in terms of “winners” and “losers,” we end up coupling our own self-worth with our relative level of worldly success, or perceived lack thereof. This emotional trap is called “the comparison game” and, as Fr. Spitzer explains, it can have dire ramifications for one’s spiritual life: “As the list [of accomplishments] grows more important for defining our self-worth and identity, we will make humility, compassion, virtue, self-sacrifice, and empathy less important.”

As I read this, I was reminded starkly of the Parable of the Sower (Matthew 13:3-9), in which Jesus speaks of the thorns and brambles – “the cares of the world and delight in riches” – which grow up and choke the life of grace that God desires to bestow on us. By indulging in the comparison game, I had allowed self-defeating emotions and behavior patterns to strangle the joy and passion out of my creative pursuits! I would scroll through Twitter with envy, begrudging the apparent success of other young writers. Writer’s block hit me like a ton of bricks and my words seemed inadequate and stale.

Like a rigged casino machine, you cannot “win” the comparison game; the only way out is to stop playing. I learned that the key to breaking the loop of self-centeredness and pride is to cultivate an attitude of service and the virtue of humility. My goals as a writer needed to be completely reoriented away from a desperate scramble for approval and towards a humble acceptance of God’s will. This change of perspective has not been an overnight conversion, but is an ongoing process of healing and discernment. One helpful devotion that I recently began practicing is the Litany of Humility. When I was introduced to this prayer years ago, I was initially put off by it, especially by petitions such as:

“That others may be praised and I go unnoticed,

Jesus, grant me the grace to desire it.”

Why on earth would I ask God that I be unnoticed, overlooked, forgotten? It seemed absurd! At that time, I wasn’t ready to receive the meaning of these challenging words. But now I understand that I was unwittingly playing the comparison game. By actively praying for the gift of humility, I am allowing God to get to work uprooting the weeds of selfishness, envy, and resentment in my heart so that, if I cooperate with his grace, humility and charity can begin to take root like seeds that fell on good soil.