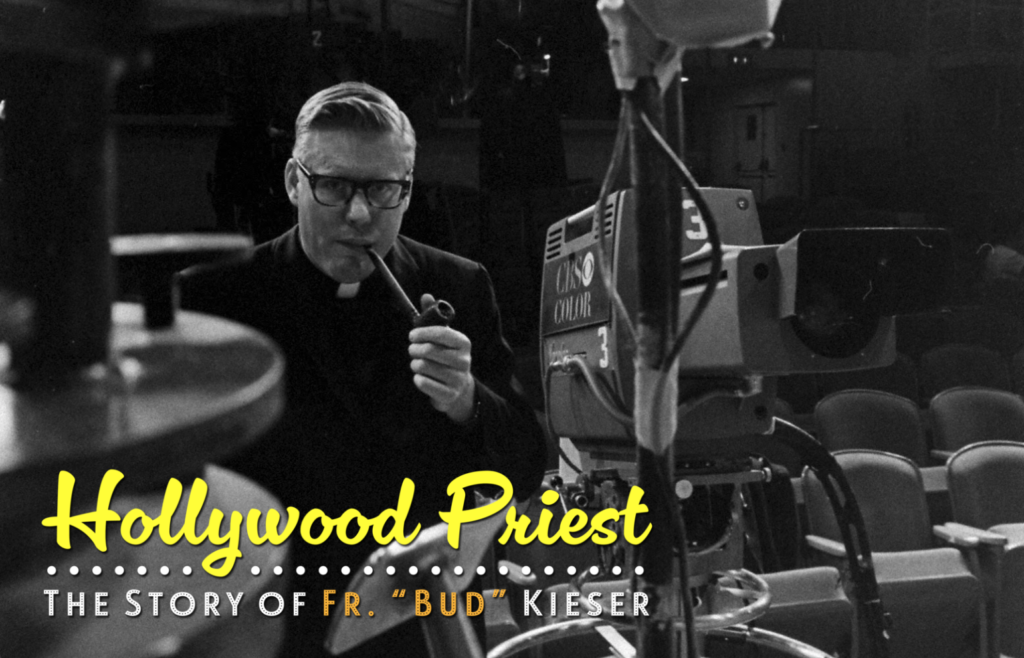 When Fr. Ellwood “Bud” Kieser arrived in Los Angeles for his first assignment after ordination, he had no plans for the future beyond serving as Associate Pastor of St. Paul the Apostle Church in Los Angeles. Becoming a major player in broadcast television who would also go on to produce major motion pictures was not on his radar.  But, that is exactly what happened. “Hollywood Priest” is the new documentary from Paulist Productions about the Catholic priest whose ministry took an exotic turn when, after serving people in the entertainment industry, he became one of them.

In 1957, Hollywood was still experiencing its golden age. While movies were still the primary form of entertainment in the United States, television was on the rise, creating plenty of work for everyone. Quite a number of new celebrities ended up going to church at St. Paul’s, including Bob Newhart (“The Bob Newhart Show,” “Elf”), Jerry Lewis (“The Nutty Professor”), Brian Keith (“The Parent Trap”), Carroll O’Connor (“All in the Family”), Jane Wyman (“Pollyanna,” “Falcon Crest”), Ricardo Montalbán (“Fantasy Island,” “Star Trek”), and Loretta Young (“The Bishop’s Wife,” “Call of the Wild”).

Fr. Bud was probably as starstruck as the next person serving at the parish, but it was not until Joe Connelly, the producer of “Leave It to Beaver,” saw him preach that Kieser’s ministry took a dramatic turn. Connelly had been taking Fr. Bud’s “Catholicism 101” classes at the parish and thought that the material might work well on television. So in 1960, a very nervous Fr. Bud walked into a television studio and filmed the very first episode of the television program “Insight,” a show that would run nationally for over 20 years.

Not that “Insight” would regularly consist of Fr. Bud preaching to the camera; it would eventually evolve into an anthology series that explored moral and spiritual issues of the day. As Fr. Eric Andrews, former president of Paulist Productions would say, “Fr. Bud was not smooth in front of the camera. But behind the scenes, as the guy who would twist arms and get things from people he shouldn’t, he was a force to be reckoned with.” That quality would come in handy as the show’s format started moving into dramas and Fr. Bud needed to recruit the top talent in town to star in the morality plays he felt people desperately needed to see.

RELATED: ‘The Way:’ The Movie vs. The Pilgrimage

The journey of making the film began when I decided to take Fr. Bud’s autobiography with me on a 30-day retreat six years ago before moving to Los Angeles. While spiritual writings can often drift into heady and idealistic tones, Fr. Bud told his own life story as he saw it, warts and all. For me, as a priest who was going to be moving to a town where image is sometimes “everything,” it was refreshing to read the story of someone who valued keeping it real in both his church ministry and his life in Tinseltown. After settling in Los Angeles, I gave the book to Maria-Elena Pineda, a producer who went to church at St. Paul’s and remembered Fr. Bud’s towering figure.  Maria responded to the fact that while Father Bud was an astute businessman, “what really moved me was his work to ‘bring everyone to the table’ to collaborate and to foster conversation in a nonjudgemental way.”

One of the best parts of putting together “Hollywood Priest” was getting to interview the talent Fr. Bud was able to get for his programming. Martin Sheen talked about how Fr. Bud influenced him during his portrayal of President Bartlet on “The West Wing.” Tim Matheson talked about playing Jesus Christ in an “Insight” episode for Fr. Bud… and then going on to play Otter in “Animal House.” Marion Ross had the same “Happy Days” lunch box I had as a kid sitting in her living room and we got to take a picture with it. And Bob Newhart shared stories from each of his six decades in the entertainment industry with that unique stammer that made him famous.

RELATED: To Live and Die in L.A.

As we learned more about his legacy, we realized that to appreciate the life of Fr. Bud through the lens of Hollywood is only to take in half of the story. In 1980, Catholic Relief Services invited him and actor John Amos (“Coming to America,” “Roots”) to go on a publicity tour of Central Africa, where a devastating famine was just beginning to take hold over parts of the continent. The suffering Fr. Bud encountered there changed his ministry, and his life, forever. Whatever he did from then on, whether it be through media or other ministerial endeavors, Fr. Bud made sure that his work always had an alleviating impact on the poor. It continues to be a good lesson for us all, no matter what town we work in.

There will be a special “sneak preview” of “Hollywood Priest” for Busted Halo readers from Aug 1 to Aug 6 at https://www.HollywoodPriest.com/BustedHalo. Visit and support the film!