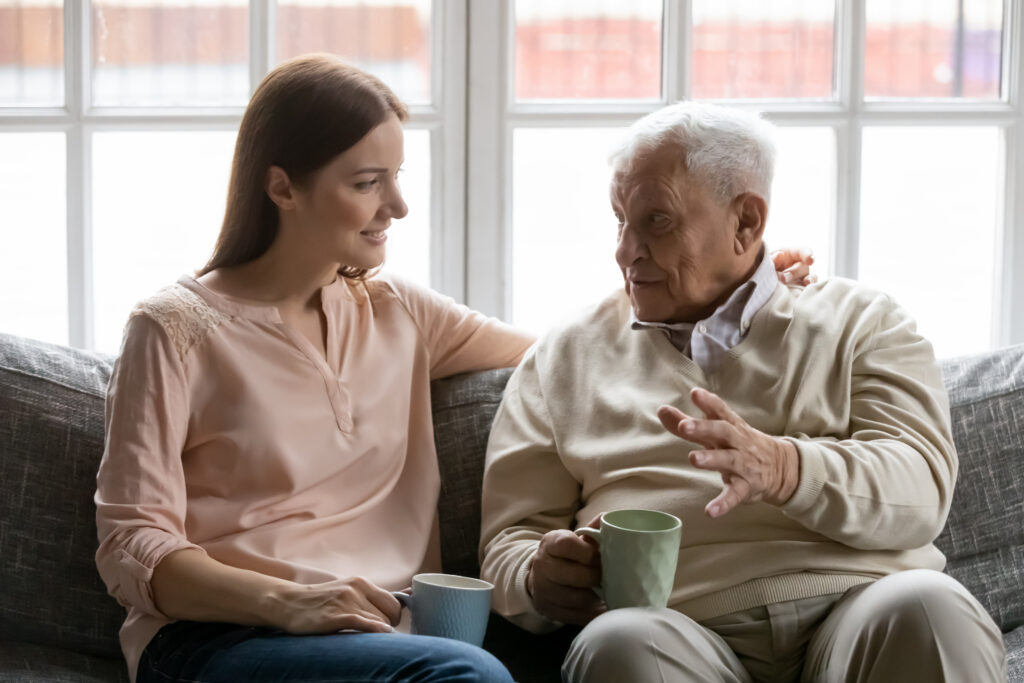 I dipped my head down trying to catch his gaze.

He looked up. He saw my eyes.

He finally understood, “Jesse! Why, yes it is!”

My smile grew into a huge grin. I could tell it was going to be a good visit.

Recently, we had been vacillating between good and bad visits. Well, “bad” isn’t the right word. Maybe, “more aware” and “less aware” is better. My family and I had been going to visit my father every other day since he moved to the memory care facility, and some days we just couldn’t “catch” him. It was like his attention was elsewhere. He was awake, but trapped inside his own thoughts, and sometimes he was stuck there.

Just a few months before, Papa had been living with us. Before that, caregiving for my 64-year-old father with Alzheimer’s disease at the same time as caring for our four children never crossed my mind as something I would accomplish… but we achieved it for almost 10 years. We survived (and even thrived) as a sandwich family, with three generations living under the same roof.

RELATED: Encouragement for Caregivers: 6 Bible Verses to Give You Strength

When Papa first moved in, his memory loss was very mild. So we could have normal conversations with him using words like “yesterday” or “last week.”

But as time went on, we learned that the only real time Papa knew was now. He could make reference to the past or future, but he didn’t really understand time anymore. When telling him a story, he was all-in, listening intently, laughing at the punch line… but then it was gone, almost instantly afterward.

It was a great reminder to try to stay “here” and not be tempted to multitask when Papa was around. When we were talking to Papa, we were ONLY talking to Papa.

So on days like this one, when I knew I had “found” Papa inside of himself, I wasn’t going to let him go. I was fully dedicated to our conversation.

I asked him about his dad and his mom, and their days working together on the family farm, since I know those are happy memories for him. I mentioned all of the wonderful baked goods his mom used to make — cookies, cakes, pies — we had all inherited her sweet tooth. He always had a special grin and nod when I talked about his little brother and best friend, my Uncle Daniel. I could imagine that he was telling me of times working in the woodshop with Dan. His English wasn’t the best anymore, but I’d heard all of the family stories before anyway, so I knew when to respond and laugh. He mumbled and garbled, but I paid close attention and was 100% focused on him.

I told him about our latest adventures with the kids and what everyone was up to. He nodded and smiled and laughed, too. I am pretty sure that he no longer could identify his four grandkids, the joys of his life for the last 10 years, but he loved hearing my stories, and I could talk for hours about their adventures and shenanigans.

We were absolutely not having a typical conversation, but we were both fully present and as focused as we could be. I was very aware of how precious this time was for us. It’s unusual, under normal circumstances, to be so purposely aware during a conversation. But, I knew that it was possible — even likely — that this would never happen again, so I wanted to soak in every feeling, every memory. I felt so thankful and filled with praise that I was still able to connect with him. It was like a special gift God had given us.

At one point, Papa responded to one of my stories by mumbling incoherently for about 30 seconds and with his head down, and then lifted his head and looked right at me and said, “You do good.” He was still building me up and being my dad after everything he’d been through. For my whole life, Papa had been my supporter and my great example in life and in faith. I often think of this short affirmation Papa had for me that day and I know that his faith and spirit shines out through me every time I cheer my kids on and encourage them.

All the way home, I smiled. I know that the minute we left, he had no recollection of our conversation or the fact that we’d been there. However, I bet he had a little happy feeling in his heart, like I did, and the rest of his day was a little bit brighter because we were there to spend time with him. Time: His (and really all of our) most precious gift.