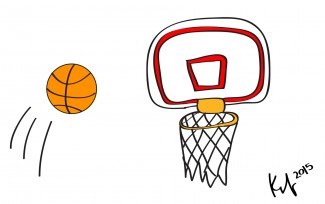 I’m an enthusiastic basketball fan roughly 3% of the year. Usually this 3% falls within the weeks known as March Madness when I join the rest of America and fall into a basketball-induced frenzy. I’ll get a bracket together, watch a few games and learn enough stats to rattle them off in conversation. Then, after a few spirited rah-rahs, my enthusiasm wanes and I go back to my attitude of relative basketball indifference for the remaining 97% of the year.

It’s not that I dislike basketball, but it really only captures my full attention for a small sliver of time when March Madness takes regular, old basketball and makes it a little more special for a month.

Sometimes I treat my faith a bit like I treat basketball. In the days leading up to Lent, I start getting excited about what awaits, and during the season of Lent, I’m a pretty enthusiastic fan—Mass! Faith discussions! Holy Days! The Rosary! Daily prayers! My bracket is the gridded checklist where I track my prayer journal entries and thrice-weekly Rosaries. Basically, Lent is my Catholic March Madness.

But I know after Easter, I’ll probably put my bracket away for the year and go back to being my regular, old Catholic self—the type that goes to weekly Mass, says some half-hearted daily prayers and calls it good. The season’s over and there’s really no reason to keep up with these Lenten faith habits.

I mean, wouldn’t that be like creating a March Madness bracket for, well, forever?

Lent isn’t basketball, though. It’s a period of reflection and an opportunity to make changes, including permanent ones, to our faith lives. I probably won’t keep up with all my Lenten changes, but that doesn’t mean my bracket needs to disappear until next year.

As Holy Week approaches, it’s time to think about making parts of my bracket permanent. Because, after all, Lent is a little more than a month of March Madness.