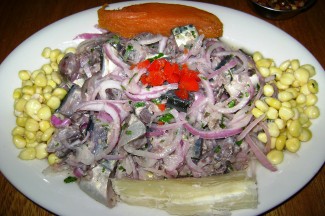 The word “Thanksgiving” can evoke different images and feelings: turkey, family, sweet potato pie and, of course, tradition. No matter what you think of first, “gratitude” is at the heart (and in the name) of the holiday.

The ritual of giving thanks dates back to the very beginning of our nation. Native American spirituality emphasizes the importance of creation and embraces giving thanks daily for the beings who inhabit the earth. Similarly, the pilgrims’ own religious traditions included an abundant offering of appreciation and love to God, the supreme power who granted a successful harvest-time.

The act of giving thanks is not the only tradition passed down with Thanksgiving in the United States. Food (and lots of it) is an essential marker of the fourth Thursday of November. According to an account from Edward Winslow, who traveled aboard the Mayflower and helped settle the Plymouth Colony, most likely the table shared at the First Thanksgiving was filled with smaller birds like ducks and geese, stuffed with herbs, onions and oats, as opposed to the classic image of a large stuffed turkey. Moreover, instead of cranberry sauce and pumpkin pie, the people of the First Thanksgiving probably shared their cranberries and pumpkin raw.

That first one, however, isn’t the only Thanksgiving spread that differs from the classic turkey and sides. Thanks to the melting pot which is the United States, tables on Thanksgiving Day are likely to look different from household to household. My own Latino family chooses to celebrate with a large rosemary turkey surrounded by pernil, arroz con gandules and ceviche. Rather than the customary American football game, we might sit around and talk about Ecuador’s fútbol team. (We are still very sore about our sad, though expected, loss in the World Cup.)

Thanks to the melting pot which is the United States, tables on Thanksgiving Day are likely to look different from household to household. My own Latino family chooses to celebrate with a large rosemary turkey surrounded by pernil, arroz con gandules and ceviche.

As a Hispanic family living in New York City, the meaning of Thanksgiving is completely different for the Gordon/Quinche/Espinoza/Calle family than it is for some other American families. For one thing, Ecuador does not have such a holiday, so when my mother and her family immigrated here, Thanksgiving was an entirely new and strange concept. Her first Thanksgiving wasn’t the best introduction to the holiday, either. It involved a trip to the emergency room thanks to my uncle accidentally swallowing a nail — he was 5 at the time and liked to put everything in his mouth. Despite the somewhat traumatic initiation, slowly my family became familiar with American customs and Thanksgiving became a time of living rooms crowded with laughter, food and people.

This year, Thanksgiving will likely include a visit to our church where there is a 100% chance we will only sing songs that have the words “thank” and “thankful” in them. After which, our small family of four will make its way to either my aunt’s or my house where our Ecua-American feast awaits. At the end of the day, after food babies have formed in our stomachs and before the turkey has left us completely drowsy, we won’t forget to go around the table and say what we are most thankful for. Some traditions are universal!

Whether your dinner table is filled with turkey, duck or pernil, and the conversation is in English, Spanish or another language, my prayer is that your Thanksgiving be filled with love, happiness, and gratitude.

If you’d like to add some Ecuadorian flavors to your Thanksgiving table, check out this food blog.