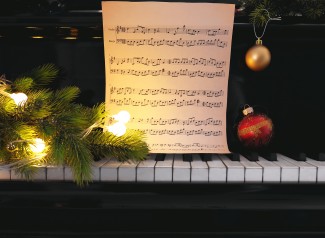 While we’re on the subject of Christmas music, let me recommend two short musical dramas with Christmas themes.

Gian Carlo Menotti’s Amahl and the Night Visitors, the first opera ever composed specifically for television, centers around Amahl, a handicapped shepherd boy with a tendency to make up stories. Amahl’s widowed mother, already driven to distraction by desperate poverty, doesn’t know how to cope with her son’s overactive imagination. One cold winter night, three kings arrive at their door, needing hospitality from the destitute shepherds. Amahl underlines this irony with some telling questions:

Since Amahl and his mother have nothing to offer their guests, they enlist the aid of their neighbors. In the Shepherds’ Chorus, possibly the most charming and accessible tune in the whole show (and notable also for featuring the word “brr” as a lyric), the shepherds greet each other on their way to deliver fruits, nuts, spices, and a ritual dance of welcome to the visiting magi. The shepherds humbly dismiss their presents (“this is all we shepherds can offer you”), but the music has a festal, even majestic quality that elevates their modest gifts.

The transformation of kings into beggars and shepherds into gift-givers shows the ultimate irrelevance of temporal distinctions of rank. Most importantly, the shepherd sequence underscores the paradox that is Jesus: God and man, king, and shepherd. When the mother asks the kings what the child they seek looks like, their response illustrates Jesus’ dual role.

In this paradoxical description of Christ, Amahl’s mother recognizes her own son, a poor boy who is nevertheless king of her affections. Jesus would understand what she means. It’s not so different from what he himself said about the least of his brethren.

Amahl and the Night Visitors features some of Menotti’s best music. Amahl and his mother are sympathetic but not idealized, and the opera features moments of tenderness, temptation, humor, and joy in what is ultimately a celebration of God’s love for broken human beings. If you’ve never seen Amahl before, it would make an excellent addition to your Christmas movie repertoire.
The second short musical drama I want to recommend is a bit different: “Little Drummer Warners,” a segment from Episode 246 of the 1990s cartoon Animaniacs.

Children’s cartoons, like most of our culture, tend to secularize Christmas rather than navigate the treacherous waters of religious pluralism. Animaniacs chose a different direction. The result is a sweet, even reverent sketch fully in keeping with the zany spirit of the show. In the segment, which features classic carols like “Silent Night,” “ O Little Town of Bethlehem,” and “We Three Kings,” the Warner siblings play shepherds at the Nativity. Like the titular character of “Little Drummer Boy,” the Warner shepherds can’t afford an expensive gift. Instead, they offer to play for the infant Jesus on their drum. The Animaniacs version differs from the song we’re familiar with only in that the drumming evolves into a full-out swing dance, with snapping magi and oxen on saxophones. I love the musical bait-and-switch, firstly because, come on, it’s fun, but secondly because I think the unorthodox arrangement has an unexpected spiritual significance. Fr. James Martin has written that the best way to be a saint is to be yourself. Sure, the Warners’ drumming may be non-traditional, but the song expresses who they truly are rather than who others think they should be, and they offer the song with genuine love. There is room for eccentricity in the stable at Bethlehem. There’s room for honesty, imperfection, even sinfulness, and that should be a relief to all of us.

Amahl and “Little Drummer Warners” have some obvious differences in genre and tone, but they both mine the Christmas story for some deep insights about who God is and who we are in relation to God. Christ welcomes everyone, rich, poor, or weird. His coming disrupts human expectations and categorizations; we see ourselves and each other more clearly in the light of the Incarnation, and we are freer to be the people we were born to be. That’s a great message to hear at Christmas time, in or out of song.