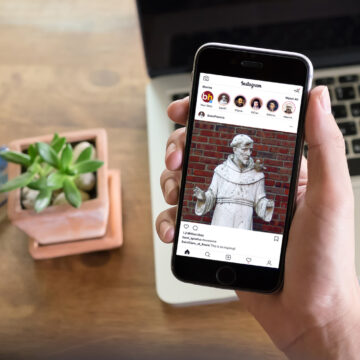 One of the popular terms I just added to my vocabulary is “influencer.” It’s not a new word per se, but it’s definitely a term that has a different meaning nowadays, especially to my teenage daughter.

My daughter and I were walking around New York City recently, when she spotted someone famous. Being the hip teen that my daughter is, she quickly identified a fashion influencer and pointed her out to me. I had to ask her, “What’s an influencer, and how does someone become one?”

Apparently, an influencer is someone who has a lot of followers on some social media platform. As in a LOT. Some influencers my daughter knows have millions of followers. They’re not necessarily pop stars or big movie actors, but they’re individuals who have established credibility in a particular niche like beauty, travel, food, or photography. People follow influencers online because they are considered knowledgeable and have expertise that helps guide their next purchase, restaurant pick, or vacation.

Even though I grew up before social media, I have my own list of “influencers.” And I follow them for the same reasons: they are knowledgeable and help guide me. High up on my list of influencers is Saint Francis of Assisi from the 13th century.

The life story of Saint Francis is packed with so much inspiration and wisdom that anyone who learns about it is bound to be amazed and influenced, but how did this “Little Poor Man of Assisi” garner so many followers, millions over the last 800 years? We have all seen a statue or an image of Saint Francis of Assisi, and in many of the representations, he’s dressed in beggar’s clothes, not caring much for his physical appearance… clearly not an influencer for the fashion or beauty industry. Rather, he influenced others by preaching with his actions and by the way he lived his life, bearing witness to love, charity, humility, and authenticity. His love for God was so impassioned that it spread to others who became his followers, who themselves became influencers, including Saint Clare, Saint Ignatius, Saint Bonaventure, Saint Anthony of Padua, Saint Padre Pio, Saint Maximilian Kolbe, and now, Pope Francis.

RELATED: Saints of Our Lives: Saint Clare of Assisi

There is an often-told story of a conversation that Saint Francis had with Brother Masseo, one of his original followers. Brother Masseo was tall, handsome, and considered to be one of the best preachers of the new budding order. One day, Brother Masseo, noticing the large crowds drawn to Francis in every town they visited, asked:

“Francis, why you? Why are people always after you?”

Francis, curious to know the reason behind the question, replied, “What do you mean, Brother Masseo?”

Saint Francis of Assisi isn’t “Instagram-perfect.” He’s not a big social media personality, nor is he one of my Facebook friends, but he’s always been one of my influencers, and I often look to him for guidance on how to follow Jesus Christ, the ultimate influencer. Francis didn’t leave us any major writings, or wall posts, or photos. He didn’t Photoshop or care about getting likes, but he preached and if necessary, he used words, just like how he taught his friars.

RELATED: Saint Francis: So Much More Than an Animal Lover

Francis didn’t just preach about Christian poverty, he lived it, giving up all his belongings. He didn’t just preach about peace, he lived it, even venturing out to Jerusalem during the Crusades. He never sought out a following, but it was through his authenticity, humility, faith, and charity that followers found him. His path of simplicity and truth is timeless and is still the trending path to God.

Eight hundred years later, Saint Francis is the ultimate enduring influencer who promotes God’s message of peace, hope, and love to this world. Now that’s something worth sharing over and over!