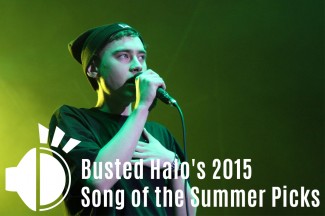 Looking for a summery tune that might have a bigger message? My vote for song of the summer goes to the dance-pop hit “King” by British electronica trio Years and Years.

At first listen, “King” sounds like a breakup anthem with all the familiar sentiments… “you were too controlling… you were keeping me down… I’m glad to be free of you,” but after a few more plays, I started to think of a different king — Christ the King — standing before Pilate as a condemned man. (“I was a king under your control/I want to feel like you’ve let me go”). Even though Jesus was a king, he chose not to exercise that status. Instead, he chose to relinquish his authority and live under the control of earthly powers.

The repeating chorus of “let go, let go of everything” serves as a reminder for me to allow God to be in charge. We all try to hold onto that power in our lives, and in the end, we have to let go and allow ourselves to be carried. This is especially evident in the music video, which features a sort of visual ballet where frontman Olly Alexander is both controlled and carried by his community.

Deeper meanings aside, the song is fun, upbeat, and catchy enough to stick in your head for at least a few weeks. I can’t get it out of mine!