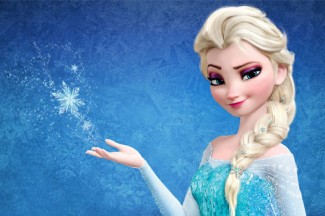 I finally gave into the hype and watched Disney’s Frozen. Not only were its music and storyline a delight on a cold winter’s day, the film offered moments of deep meaning for me, something characteristic of many Disney stories. Frozen is based loosely on the Hans Christian Andersen fairy tale The Snow Queen which, like many fairly tales, have strong spiritual themes. Frozen isn’t explicitly spiritual but it teaches us about the importance of feelings, gifts, and relationships.

The story begins by focusing on young Princess Elsa who has the strange ability to magically create ice and snow with her hands. This ability offers lots of fun for her and her younger sister Anna until Anna gets hurt in their play. Elsa’s parents, the king and queen, see little good in Elsa’s ability and have trolls erase Anna’s memory of her sister’s strange gift. The king has Elsa kept in confinement until she is able to control her ability. He even has her put on gloves. “Conceal it,” he tells her. “Don’t feel it,” she says to herself. “Don’t let it show.”

The trolls clearly see her power as a gift, one that can be used for good, but one that can also be bad if Elsa does not learn how to control it. “There is beauty in your magic,” the wise troll says. “But also great danger.” Because of Elsa’s confinement she loses her closeness with her sister Anna and doesn’t emerge until her coronation day. It is then when her power goes out of control and she brings an eternal winter to her city. The citizens fear her and she runs off into the mountains.

There are two messages that come out here. First is the importance of fostering our gifts. The gifts and talents we are born with or discover can be used for good or evil. Cultivating these gifts by using them helps us discover good ways of using them. In the film, despite the troll emphasizing the importance for Elsa to learn about and control her gift, her parents lock her away and tell her to keep it hidden, even from her closest friend, her sister. For years she was forbidden from using a gift that was so much a part of her true self: creating ice and snow. It wasn’t until her coronation day escape into the mountains where we see a cathartic expression of her gift in a storm of snow and ice, creating a crystal ice palace for herself.

The unfortunate lesson she learned was that if she was going to fully be herself, she would have to live on her own. We know the greater lesson: If we cultivate our gifts and embrace ourselves as we are without denial, there’s no reason to run away. Like Elsa, we are born with many traits, talents, and gifts — these are what God gave us and God never asks us to hide them.

Professor and social worker Brené Brown speaks about vulnerability and shame. She says that shame comes from a fear that being vulnerable will turn people off. Elsa was made to feel shameful of her gift, and for fear of hurting others she kept it hidden. Brown says that being vulnerable by exposing our true selves actually brings respect. That’s all Anna wanted in the end, to know her sister’s true self.

Sit with your feelings

The second message is the importance of feeling. From the beginning Elsa was told that letting herself feel her power could only lead to destruction. How often have we heard, especially in religious circles, that even feeling something deemed as “forbidden” or “taboo” can lead to destruction? As a result, our culture (and many others) tends to tell us to repress certain feelings. Unhealthy repression can lead to greater destruction, which Elsa discovered. Instead of mastering her power she lost control of it.

Feeling what’s real — in this case a gift or personal attribute — brings value to it. Brené Brown says that feelings are invaluable. Allowing ourselves to sit with feelings like pain or guilt, or positive things like joy or trust, can actually make us better leaders. This extends to the rest of our lives too. Denying or numbing ourselves to reality typically backfires. Elsa lost respect as the new queen and also lost her relationship with her sister.

Frozen also harps on the theme of having a cold heart. Since she never learned to control it, Elsa’s power seems to create many cold hearts, which can eventually mean death. In a moment of anger Elsa flashes Anna’s heart frozen. Only an “act of true love,” we learn, can melt a frozen heart. What happens (SPOILER ALERT) is that the act of true love comes not from a handsome prince but from Elsa and Anna’s reconciliation. Once their relationship was restored, Anna unfroze.

The moral of the story is that the warmth of genuine relationships doesn’t allow for permanent cold hearts. In relationship, warmth comes from cherishing one another’s gifts and allowing feelings to be felt regardless of how hard it might be. Anna and Elsa discovered that the sisterly friendship they had was frozen because of the shame put on Elsa’s magical power.

We might begin by looking at our own unique God-given gifts and traits, those things that are so much a part of our identity. If you’ve felt shamed for them in the past, perhaps this is a time to “let it go.” The cost of accepting ourselves fully without hesitation is well worth the wholeness that God desires for us. We might also consider our relationships with friends and family. As with Elsa and Anna, when the shame melted away through love and transparency, their friendship could be revived. Frozen hearts come from past hurts, grudges, and hidden shame. Letting go — whichever end you may be on — offers a chance of reconciliation. Then you will be in a freer space to cultivate your gifts in a spirit of joy and discovery.