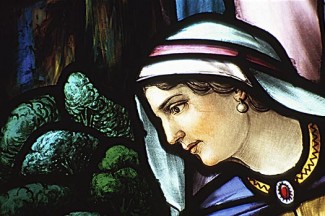 I have to admit that this practice has a certain appeal to me as well. Why are Catholic women bringing back this practice?

Here are some good reasons:

Here are some reasons that, well, stink:

To veil or not to veil (that is the question)

This is a decision that the Church has left to the prayerful discretion of her daughters. Period. If it makes you feel uncomfortable, don’t do it. Don’t feel obligated to do it. If you find it meaningful and empowering, well, then go ahead, girl. Rock that mantilla. Make sure you understand why you’re doing it. Make sure you’re doing it for the right reasons.

Check out Laura McAlister’s hilarious “50 Simple Steps to Wearing a Chapel Veil or Mantilla.” If you’re looking for some practical advice, this is helpful. Also, you don’t have to wear a mantilla — a beret, shawl or any other hat will do. “Girly-girl” that I am, I go lace all the way.

Do you cover your head at Mass? Why or why not?