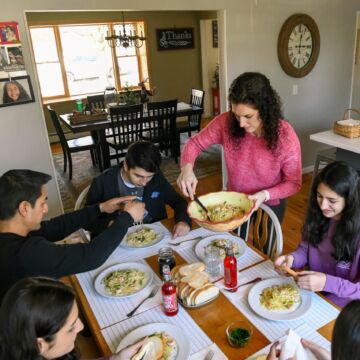 The invitation started with a LEGO set. My 7-year-old came downstairs to show me his newest brick creation, a castle-like structure inspired by his latest reading of “Harry Potter.” “That’s great!” I said, with the enthusiasm of a mother who is proud of her child’s accomplishments but doesn’t quite understand the fascination with plastic building blocks. I had just read the brief bios of our diocese’s newly ordained priests, including one who was to be placed in our parish. “You know, it says here that Father likes LEGOs too.”

“Maybe I can bring this to church and show him?” my son asked.

“Mass might not be the most appropriate place. Maybe he can come over and see it?” I offered. While our family had socialized with priests before and had some who were family friends, we had never invited any priests from our parish into our home. But the thought had entered my mind the year I enrolled my eldest in CCD, and I began to think of what kind of relationship I wanted our family to have with our parish.

“Yeah!” he shouted, running up the stairs to share the news with his siblings.

RELATED: Children and the Church: Recognizing the Welcome

And so it began. Later that week, I extended a dinner invitation after Mass, along with promises to show Father every single LEGO creation under our roof along with an assortment of toys from my younger children’s collections.

The first dinner was a success, and my husband and I have since invited several priests into our homes for meals on multiple occasions, but it’s a relatively new practice for us. Even though we’re both cradle Catholics, neither of us previously made it a point to actually socialize with the men leading our church.

Growing up, I remember exactly the priests I avoided going to for confession. I remember seeing a priest at a local fast-food restaurant and being astonished that he was not only walking around outside church but also eating french fries! My parents taught me to respect those called to a religious vocation, but part of that respect meant keeping them at a distance, not bothering them.

For us, that meant we treated our parish priests with a reverence that included holding open doors and greeting them with a curt “Good Morning, Father” but never one that would include high-fiving them after Mass or asking them about their brothers and sisters, as my children have since done.

As I grew older and my faith stronger, I realized I didn’t want this same relationship for my own family and children. I didn’t want them to see our Church as cold or distant or the people in it as strangers you are polite towards. As one family friend and then another was called to the priesthood, it became even more important (and easier) for me to humanize the vocation.

I would be lying if I said I wasn’t at first nervous when we started extending invitations to our parish priests. Would they think our house wasn’t clean enough, big enough? What if they thought our kids were too loud? What if they didn’t like what I cooked? “Do you think we’re not Catholic enough?” my husband joked, trying to dispel my anxiety with humor. But then I started to worry if they might judge us for not having a crucifix in every single room.

My fears were misplaced. Every dinner we have shared with a priest has included good conversation and company. Dinners have been eaten heartily. No judgments on decor, Catholic or otherwise, have been passed. At the end of our first dinner with Father, my husband and I apologized for how loud and rambunctious our children were that particular night. “Not at all,” he said. “I love it. It reminds me of home.”

Inviting our parish priests into our home has helped our family grow closer to our church. By humanizing the vocation of the priesthood, my children can see a connection between their own human and spiritual selves.

While the dinners themselves are quite normal in terms of fare, they become a special event that my children become excited about. And that excitement truly bubbles over into seeing our dinner guests at Mass the next week. It also doesn’t hurt that they have a captive audience to show their toys to and that dessert is usually served.

This year, my oldest received his First Penance. In the days leading up to the event, I could tell he was getting nervous. But as we walked through the doors of the church that morning and I pointed out all the priests he knew, I could see him relax. These weren’t strangers. These were people who had sat around our dinner table, told stories of their childhood, and discussed their favorite ice cream toppings with him.

Our priests are our connection to Jesus, making him truly present in the Eucharist. Our connection to them should also be nourished. It does not require an elaborate feast or a perfect home. Great conversations and meaningful relationships can be built with plates of spaghetti and mismatched chairs. After all, we have our priests for the most joyful and sorrowful moments of our lives. Shouldn’t we invite them in for the everyday, mundane (loud, chaotic, and LEGO-filled ones) too?