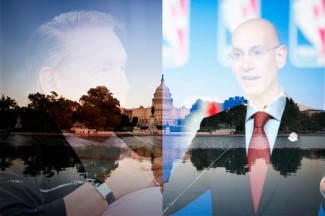 By last weekend, nearly everyone had heard about the racist rant caught on tape, attributed to Los Angeles Clippers owner Donald Sterling, and released by the celebrity gossip outfit TMZ.

Right away, anyone who’s anyone was weighing in on Sterling’s rant. Speaking at a press conference in Malaysia, President Obama lamented that the nation still struggles with issues of race, and said that he had “confidence that the NBA commissioner Adam Silver, a good man, will address this.”

Tuesday, Silver did just that, announcing a lifetime ban on Sterling’s attendance at NBA events, a $2.5 million fine, and that he planned to ask NBA owners to strip Sterling ownership rights.

In total, a mere four days passed from the time the world learned about Sterling’s racist rant and his lifetime ban from the NBA.

The mobilization in public opinion, the swift condemnation from public leaders, and the NBA’s punishment shows that things can still get done in this country.
Why can’t our federal government act with the same urgency and efficiency?

Consider three areas where, despite public outrage and political pressure, there’s been no change in law.

In December 2012, just days after the Sandy Hook shooting that left 26 students and teachers dead, public sentiment quickly coalesced around the push for stronger gun control laws. At the time, according to Gallup, 58% of Americans agreed that laws around the sale of firearms should be made more strict.

Legislation was introduced but went nowhere. Last year, the Senate failed to pass even an expanded background check for gun sales. Senate Majority Leader Harry Reid said he would bring up the issue in 2014. He hasn’t.

Earlier this year, a group of Democratic representatives urged the president to include a renewed push for gun control legislation in his State of the Union Address. He didn’t.

In fact, across the nation, 30 new pro-gun laws have been passed just this year. In Georgia, a bill was just signed into law that allows concealed weapons in airports, schools, bars, and churches. Churches.

Leaders on both sides of the aisle consistently express support for reforming the nation’s broken immigration system, but they’re incapable of coming up with a plan.

According to the Center for American Progress, “five recent polls from January and February illustrate clearly that the public strongly supports immigration reform that includes a pathway to citizenship, rejects approaches that would continue to give unauthorized immigrants second-class status, and will be disappointed if immigration reform fails to pass this year.”

A Fox News poll found that 68% of Americans support a pathway to citizenship for those living in the United States illegally.

The political pressure is there, too.

Former Florida Governor Jeb Bush, a possible candidate for the presidency in 2016, recently made headlines when he suggested that those who enter the United States through back channels aren’t felons:

The way I look at this is someone who comes to our country because they couldn’t come legally, they come to our country because their families — the dad who loved their children — was worried that their children didn’t have food on the table. And they wanted to make sure their family was intact, and they crossed the border because they had no other means to work to be able to provide for their family. Yes, they broke the law, but it’s not a felony. It’s an act of love. It’s an act of commitment to your family.

Bush’s view is that of most Americans. So where’s the action?

Despite mixed signals earlier this year, it appears House Republicans won’t be lining up behind any immigration bills before the break for mid-term elections. In fact, Speaker John Boehner recently mocked his House colleagues who won’t move to draft legislation similar to proposals languishing in the Senate.

Rep. Mario Diaz-Balart, a Florida Republican in favor of reform, warned that without action soon, “I don’t think it happens for I think a few years.”

According to Gallup, more than 70% of Americans support an increase in the federal minimum wage, which currently stands at $7.25 per hour.

A person working full time at minimum wage earns about $15,000 per year, not enough to pay for basics like food and shelter. As a result, these individuals are often forced to rely on government subsidies to make ends meet. Raising the wage to $10.10 per hour would lift millions out of poverty, reduce the need for government assistance, and help, albeit in a tiny way, slow rising inequality.

Most Americans support raising the minimum wage. Republicans and Democrats support it. Economists and labor leaders, too. Even bishops and nuns are on the same page!

And yet, a bill introduced in the Senate that would raise the wage to $10.10 per hour by 2016 “should win backing from nearly all of the 53 Democrats and two Democratic-leaning independents, [but] few Republicans are expected to join them, likely leaving them shy of the needed 60 votes to begin debate,” according to ABC News.

Gun control, immigration, and increasing the minimum wage. Despite public support for all three, none will be addressed in any meaningful legislation this year.

What Donald Sterling said was hate-filled and the NBA was right to take swift action against him.

With 30 people dying from gun violence each day in the Untied States, with families being ripped apart by broken immigration laws, and with children unable to eat enough because of low wages, it’s baffling that we as a nation can’t address these scandals in the same fashion.