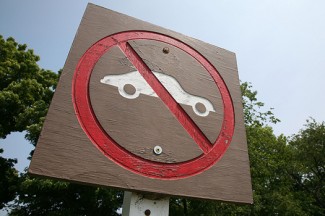 Since I was a teenager, I’d always been a heroic sacrificer of chocolate, candy, or sweets come Lent. I heart sugar, so it was genuinely hard. But looking back, I was probably doing it as much for my looks as for God.

In 2010, I took a slice out of my vanity by giving up Facebook. Robbed of the chance to check my profile and see how great I looked on the outside, and how much everyone wanted to post messages to me, I soon realized how little those things had to do with the person I was made to be.

Well, the next year I hit upon the idea of sacrificing something even tougher: my car. Giving up driving isn’t possible for everyone — not with the way our cities and small towns are designed — but a JustFaith course on social justice inspired me to think about how individual decisions affect society. Driving everywhere wasn’t good for traffic, or for the environment.

Leaving my car in the driveway, I saw, would be difficult, but doable. I lived near a bus route that dropped off near work. Other buses hit different key parts of the city. Signing up for Car2Go car sharing was an option if things got tight. And probably most importantly, I had both a wonderful boyfriend who’d pick me up and an extremely kind roommate who’d let me hitch a ride.

The morning of Ash Wednesday, it was almost over before it began. I was waiting at the bus stop when I pulled out my phone, checked my calendar, and realized, “Uh-oh. I have an off-site meeting.” No buses went near it. If my coworker couldn’t swing by for me, my goose was cooked.

She did come by for me, but once again, things weren’t all smooth from there. My commute took more time both ways. Sometimes I was late to work because I missed the earlier bus. I skipped out on some social events if I didn’t have an easy ride. Getting groceries was a challenge; I could only buy as much as my two hands could carry the six or seven busy blocks back. My boyfriend and roommate, bless their hearts, were generous with their chauffeuring.

Above all the other benefits, giving up my car reminded me I wasn’t driving my own life. God is in charge. I depend on other people God has created. I depend on God.

But what I was giving up was more than carbon emissions, I soon realized — it was the illusion of control. When we have our own private vehicles to speed around wherever we want, whenever we want, we feel powerful. We seem like the drivers of our own individual lives.

Without the car, I walked more — reminding me just how frail one human being is.
Minus the fast machine, I had to step at the same pace that people have walked since time began. Yet as much as this took away my power to speed around, it was unexpectedly pleasant as well! I looked up at the moon, noticed the cloud patterns, and literally smelled the flowers on my walks to and from the bus.

Because I couldn’t walk everywhere, I also had to be more dependent on the larger social system (which provides the buses) and the goodness of others (who would give me rides).

A surprise benefit of the bus: it exposed me to more people. Because while the bus picked up and delivered many university students and employees like me, it also was a transportation lifeline for the poor and, since the Texas School for the Blind was near my house, the blind.

I won’t say that seeing these people daily “reminded me how lucky I am.” People do not exist to help me feel more fortunate. Instead, I’ll say they amazed and moved me. Too often our society is so segmented that we’re only exposed to people of our own class. Public transportation puts us all together, and we have a few minutes to contemplate each other. It’s not like being at a social event, but it’s more than passing on the street. We have time to take in each other’s dignity and courage.

Above all the other benefits, giving up my car reminded me I wasn’t driving my own life. God is in charge. I depend on other people God has created. I depend on God.

The logistics of work and living in your city or town may not be possible without your car. But somewhere in this complicated modern life, I encourage you to find a trapping of individualism and forsake it. The spiritual benefits will bring meaning to your sacrifice.