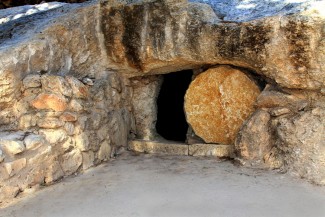 As Christians, this may be the most important question we can ask. Certainly St. Paul thought so. He once declared that if Christ did not rise from the dead, then our faith is in vain.

Yet the gospels give surprisingly few facts about such an significant and in fact essential event. There are no details about how God raised up Jesus. There were apparently no witnesses to the resurrection itself, no one to describe what had occurred or when. All four gospels tell us that on Sunday morning, three days after Jesus had died, some of his disciples found that the tomb in which his body had been placed was empty.

This fact alone did not bring faith to the disciples. The absence of Jesus’ body caused some bewilderment or led them to suspect that someone had stolen it. It was only after the disciples began to have encounters with the risen Lord that their puzzlement turned to belief. The gospels describe several of these encounters and lead us to believe that there were others undescribed.

Perhaps the greatest proof of the reality of the resurrection is found in the impact these appearances had on those who witnessed them. During the arrest and crucifixion of Jesus, his followers all seemed overcome with fear. No one had the conviction to defend Jesus or speak out on his behalf. Yet after they had met the risen Lord, these fainthearted disciples underwent a radical conversion. Not only were they filled with joy, but they now had the courage to tell others what Jesus had meant to them, no matter what response they received. Far from being examples of momentary enthusiasm or mass hysteria, these conversions were real and long-lasting. Nearly every witness to the risen Christ went on to live a missionary’s life and die a martyr’s death.

Nor was this powerful, life-transforming experience of the risen Lord limited to the generation of Jesus’ contemporaries, who had walked with him and heard his teaching with their own ears. Saul was a persecutor of Christians until he encountered a vision of Christ on the road to Damascus. In the wake of that vision, Paul was to surpass all others in his enthusiasm for spreading the gospel throughout the known world, until he, too, died as a martyr. For nearly 300 years a violent death was the likely fate of anyone who became a Christian, yet wise and sensible people continued to seek baptism.

For Christians of the 21st century, the resurrection expresses our belief that Jesus is alive today. All that Jesus was for the disciples who walked with him along the trails of Galilee he is for us today through the church which is, as Paul described it, the living body of Christ. We experience the healing and lifegiving power of the risen Christ through our listening to the word of Scripture and through our sharing in the Eucharist. In our prayer, we can enter into a relationship with Jesus that both supports us through dark moments and challenges us to become ever more “Christ-like” in our attitudes and in our behavior. In meeting those in our church who feed the hungry, visit the imprisoned and care for the sick, we are reminded that the Word continues to become flesh, and live among us.

Each Easter we celebrate our belief in the resurrection by welcoming new members into our church thorugh the sacraments of baptism and confirmation. Their stories of faith and their decision to commit their lives to the gospel renew each local community of faith. As they plunge into the water of the baptismal pool and emerge dripping wet but never more alive, we witness the truth of Christ’s resurrection once again.