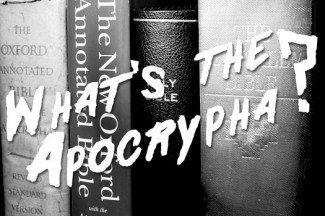 What’s the Apocrypha and why is it part of some Bibles and not others?

The Apocrypha is the set of 15 books generally placed between the Old and New Testaments that is included in Catholic but not Protestant bibles. The set includes the books of Tobit, Judith, The Wisdom of Solomon, Ecclesiasticus, Baruch, 1 Maccabees, 2 Maccabees, and portions or additions of other books in the Old Testament. None of these apocryphal books were a part of the original Hebrew scriptures (what we generally call the Old Testament). However, they were written in Greek and were included in early Greek versions of the Jewish scriptures.

Hundreds of years ago Protestants decided that since they weren’t a part of the Hebrew scriptures they shouldn’t be included in a Christian Bible. The Catholic Church, on the other hand, decided that if they were important to Greek-speaking Jews around the time of Jesus, they were important enough to print as part of our Bible. These days, there is less contention around their inclusion or exclusion from the Bible. Some Protestants do read and study these books even as many Catholics have never read them.