‘I Am Trayvon Martin’ 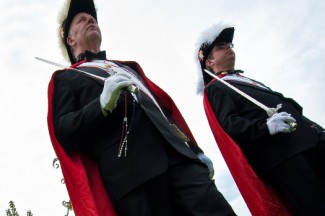 Before I met Brandon, whenever I heard of the Knights of Columbus, I pictured a bunch of old, crotchety, white men sitting around selling chicken or pancakes after Mass. I think we’ve probably all had the experience of being at a church event and instructed to do something by a surly old man in a Knights polo that acts as if he is running the show. Needless to say, my impression of the group was negative and I have met a lot of people who are not shy about voicing this same opinion.

Being a Knight, Brandon is always telling me stories about them. He told me how the Knights were actually founded during a time of rampant Catholic discrimination.  The Knights of Columbus wanted to give men a strong Catholic community to help support their family values and maintain their faith during a time of persecution.  Brandon has also told me about how much good they do. It really is amazing. Just a couple of neat facts about them: Every year they give away about $150 million to charitable causes. All the members combined work 70 million volunteer hours a year. After Hurricane Katrina they gave New Orleans $10 million to get the schools back up and running. Every year they give the Pope $1.6 million to use for whatever charitable causes he sees fit. But on a smaller scale, the parish and its members can always count on the Knights for whatever they need. Here in Brandon’s council they helped a widow who was recently confined to her wheelchair. Along with building her a ramp, they raised her flowerbeds and added a walkway in her backyard for her wheelchair so she could still get out there and do gardening from her wheelchair.

I’ve never really encountered or witnessed the Knights in action until a couple of weeks ago. We went to a wedding in a small town outside of Austin. It was for the son of one of Brandon’s fellow Knights. I’ve honestly never been so impressed with a group of people as I was with the Knights that day. The council in that town is H-U-G-E and they have their own hall, which is where the reception was held. The reception had about 600 people at it and the Knights ran everything. Along with setting up all the tables and chairs and decorations, they cooked all the food – good barbecue will all the fixings – and served it, and did clean up. I heard they smoked 420 pounds of brisket that day. It was such a community effort. And during the reception, lots of people who knew Brandon came up and introduced themselves to me and asked if I needed anything. With so many Knights around I always had a full cup, I never got up to throw anything away because they did it for me, and I was never standing around awkwardly without anyone to talk to. They immediately made me feel like family. It was overwhelming hospitality. I seriously did not have to do one thing. I felt so welcomed and taken care of. It was such a show of community.

Within the church, there are a lot of groups that are easy to stereotype negatively and while they all have their gruff and pushy members there are definitely more good members than bad. The Knights, along with many of the other church groups, are a good vehicle to help put one’s faith into action.  Helping the world is a big task; being part of one of these church groups helps us better facilitate how we want to live out our faith in service to others. As a whole, these groups are a force of good. And if they can also cook a mean fish fry, then more power to them.

In this video, Irving, a Mexican immigrant who has been living in NYC since age 4, talks about his struggles being undocumented and interviews a…

In this video, Giselle prepares for her departure to Mexico where she will reunite with her husband and continue to video blog about their life…

There was something very Miracle on 34th Street about Peoria’s new mall. Opening just before the holidays, the “open-air lifestyle center” promised to recreate the…