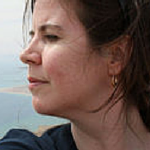 Laura Sheahen is Catholic Relief Services’ Regional Information Officer for Asia. CRS is the international humanitarian agency of the Catholic community in the United States. It works to help impoverished people in nearly 100 countries, without regard to race, religion or nationality.

Fleeing war and famine, fighting off attacks from bandits and lions, thousands of refugees are flooding out of Somalia on foot each week. Busted Halo contributor Laura Sheahen, a communications officer with the humanitarian aid group Catholic Relief Services, looks back on her first days in some of the refugee camps that are receiving them. Let us remember our sisters and brothers in East Africa in our prayers.

Small plane to airstrip in Dadaab, a tiny, broken-down town in northeast Kenya. Blinding clouds of dust billow from the car in front of us as we make our way to our local partner’s compound. Dust instantly coats everything we carry. The same dust has swallowed up any hope of growing crops or raising livestock across the border in Somalia, where the drought and famine are worst.

“When our first child was born, my husband said, ‘Now I have a son to avenge my family.’ He named our baby boy Rambo.”

I usually associate the birth of a baby with fuzzy booties, not machine guns. But I was in a southern area of the Philippines called Mindanao, where vendettas out of Sylvester Stallone movies happen — a lot.

I was talking to a woman named May; she’d married into a family that was haunted by the years-old murder of a grandfather. May’s mother-in-law couldn’t read or write, but would send audiotapes to her son when the couple lived outside the country. “She’d say they needed money for guns. She’d say, ‘Come back to the Philippines and kill these people!'”

In Mindanao, three groups — Christians, Muslims, and indigenous people — have suffered for decades at each other’s hands. All three groups have valid grievances rooted in the area’s seriously troubled history. But at this point, learning to get along — to stop the massacres, abductions, bombs, and hijackings — is pretty much the only option.

So this is where my work for Catholic Relief Services had led me: to a brothel. I was in the middle of a red light district in the go-go city of Mumbai on India’s west coast. The social worker we were with strolled casually into a shed-like doorway and starting chatting with one of the women. I stood tensely, aware that in the metal cubby right behind me a young woman in a spangled sari was sleeping soundly.

It was midday and there was no “activity” going on. But the tiny, sardine-tin brothel — its walls painted an incongruous robin’s egg blue — was appalling enough. Each woman slept and worked in a metal room that was perhaps eight feet by six feet, far smaller than walk-in closets I’ve seen in America. A footlocker was on a shelf above the narrow plank-like bed. Sometimes, my guide told me, the women’s children were kept under the bed at night — occasionally drugged so as not to make noise that would disturb clients.

When the social worker — a Catholic Relief Services partner — walks through this neighborhood, she’s focused on how to get the women’s kids in school. She’d seen it all. I hadn’t. It was unnerving to think how many women were in the brothels that honeycombed these alleys.

Worst of all was thinking how many were there against their will. My guides and I walked out of the brothel quietly — it seemed easy enough. A few children and older women on the side street stared at us. We kept on for a few blocks until we reached our car.

Hundreds of young women can’t walk away. “There are henchmen hanging around to catch any prostitute who tries to escape,” says Priti Patkar matter-of-factly. For twenty-five years, Priti and her husband have worked to save the thousands of teenage girls who are brought to the red-light district under duress, often tricked by acquaintances or even family members. The girls are held for years, working as unpaid prostitutes to make money for owners who buy and sell them. The Patkars head up Prerana — “Inspiration” — a CRS partner that helps girls who are rescued.

I’m an information officer for Catholic Relief Services in Asia. This past month, we’ve had our hands full keeping up with the string of natural…