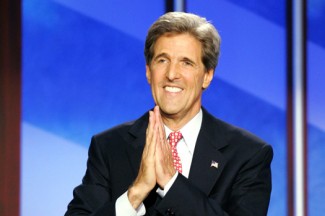 Tomorrow, the U.S. senator from Massachusetts and 2004 Democratic presidential nominee John Kerry will be sworn in as Secretary of State, taking control as Hillary Clinton begins the next chapter of her very public life. Clinton visited more than 120 countries and racked up one million miles of travel. She introduced a refreshing sort of diplomacy, bringing American soft power to the people, hosting Q&A events with everyday folk in the countries she visited, paying special attentions to issues that affect the lives of the most vulnerable, women, and children.

Kerry, a Catholic, begins his tenure as the nation’s chief diplomat at a time when international flare-ups abound and pressures on the United States at home and abroad are great. He will face the well-known crises of civil war in Syria, the faltering transition to democracy in Egypt, human rights abuses and currency manipulation in China, and a litany of other high stakes affairs.

What, though, are some of the other challenges that Kerry might bring back into the spotlight? Could his faith guide him toward advancing human rights in the forgotten places where U.S. involvement might help individuals lead more dignified lives? Below are five suggestions that the new Secretary might consider.

Standing with the people of Cuba
Last year, Pope Benedict visited this island nation 120 miles off the coast of Florida, following the visit of his predecessor, John Paul II, calling for reform and criticizing policies, both internal and external, that keep the Cuban people poor and curb freedom. While minor reforms from the Castro brothers offer some semblance of hope that change may be on the way, the United States should consider policies that help encourage reform, including even greater travel rights and the loosening of trade embargoes.

Refocusing on Haiti
It was three years ago that 250,000 Haitians perished in a devastating earthquake, but progress in rebuilding has been slow and painful. Catholic Relief Services offers a collection of stories about the hope that Catholics on the island have brought, and much work remains. Haiti is notoriously corrupt, so throwing more money at the problem is not the solution. Instead, the United States could play a role in helping to organize NGOs, finding out what the Haitian people need, and assisting transparent and effective governmental programs with increased aid.

Finding peace for Northern Ireland
Way back in 1999, I spent a summer tracking the continuing trouble in Northern Ireland for a high school history summer project. Each day, I read magazines and newspapers (in print!), chronicling the violence and suffering caused by clashes between the Catholic minority and Protestant majority in this disputed region. There seemed to be no end in sight: Catholics wanted the land to return to a unified Ireland and Protestants insisted that it remain part of the UK. While the violence died down in the early part of last decade, today it has returned. President Bill Clinton famously helped to negotiate peace there in the 90s. Perhaps Kerry, of Irish descent himself, might return to the region today and offer a more permanent solution that respects the wishes of the (now Catholic) majority.

Pushing for a two-state solution in the Holy Land
The Vatican announced in 2011 its support of a two-state solution for the continuing violence plaguing Israel and the Palestinian people. While the prospects for that seem dim now, perhaps the United States can work with Israeli leadership toward crafting a solution that both ensures the continued security of Israel while finally offering the Palestinian people a chance at leading prosperous, dignified lives.

Looking for solutions in Latin America
David Golemboski pleaded for Catholics in the United States to turn their attention to the needs of individuals living in Latin America in a recent issue of the Jesuit magazine America. He wrote:

Latin America, home to some of the poorest nations in the Western Hemisphere, stands to benefit from U.S. intervention, and if Catholics in the pews made these countries a focus again, perhaps Kerry’s state department could achieve results there as well.