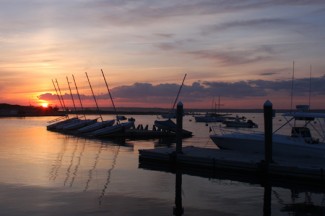 Since my move to Boston from Chicago, people often ask me what’s different about living in the Northeast versus the Midwest. Are people unfriendly? Are they more liberal? Is the traffic worse?

I politely answer all of their queries and usually dispel some stereotypes in the process. However, I have to admit, I have asked myself those same questions: What is different about where I live now versus the Midwest? What do or don’t I like about my new home?

I was delighted to receive an invitation to the ordination and Mass of Thanksgiving of a college friend, who was in the final stages of Jesuit formation. Having a slight obsession with the Jesuits and eager to support my friend, I looked forward to the occasion. Also, having been city-grounded for months, I was anxious to get out of Boston to attend the events near Watch Hill, Rhode Island, almost two hours away.

RELATED: 5 Tips for a Spiritual Summer

In the Midwest, there are such things as day trips. In fact, my dad has always been a huge fan of them. He bought a book about day trips and meticulously underlined all the facts about each destination, usually some sort of historic location. We visited Civil War sites, Amish villages and lots of creeks, which were all very nice. However, there is a reason books about day trips in the Midwest are not very thick. If you go two hours outside of most Midwestern cities you are, well, near cornfields in “the middle of nowhere.” There are miles of torturous stretches on major highways lined by corn, where even the best car air conditioners can’t seem to keep up.

Moving to the Northeast, I was pleasantly surprised to find that driving less than two hours puts you in a beautiful scenic location, with so little effort. It blew my Midwestern mind.

I realized I felt like I had been on vacation. Had I? I was only two hours away. Last year, I went to Machu Picchu. Surely, that was a vacation. Was this? It was not only my enthusiasm that tipped me off. I felt — calmer. After crawling through a trying semester of graduate school, I hadn’t realized how desperate I was for unscheduled time. When my friends dropped me off on Main Street, I was nearly giddy: four hours to explore and do whatever I wanted when I wanted.

Watch Hill did not disappoint. While other friends went out for the night’s festivities, I graciously accepted the offer to spend the evening in downtown Watch Hill, a touristy seaside town nestled among mansions, stately old hotels, boutiques and lighthouses. The entire main street follows the rim of the bay, and homemade ice cream and a carousel for kids put the finishing touches on this utopia.

Anticipating the scenery, I packed up my best camera and all of my lenses. I wandered the hilly streets, the handsome coastline and the idyllic shops. (Yes, I bought overpriced jewelry.) It was a photographer’s dream come true.

Watch Hill is the type of place that Midwesterners save up to visit. It holds its own among better-known New England destinations — Nantucket, Cape Cod, Martha’s Vineyard.

As dusk began to set in, I found the perfect spot on the bay to take sunset pictures. It had all the elements I wanted to remember: the calm water, the sailboats, the brilliant colors across the sky and the stillness of the moment. I carefully captured dozens of shots, as every ten seconds of a sunset seems to birth some new color more brilliant than the last.

Eventually, the hours passed by, my friends came to pick me up, and we headed back to Boston.

The next day, I excitedly uploaded my photos and called my mom, gushing about the town, the sea and the scenery. In the midst of my enthusiasm, I realized I felt like I had been on vacation. Had I? I was only two hours away. Last year, I went to Machu Picchu. Surely, that was a vacation. Was this?

It was not only my enthusiasm that tipped me off. I felt — calmer. After crawling through a trying semester of graduate school, I hadn’t realized how desperate I was for unscheduled time. When my friends dropped me off on Main Street, I was nearly giddy: four hours to explore and do whatever I wanted when I wanted. And take pictures of all of it. Strike up conversations with people I’d never met before, just for fun.

I will always remember Watch Hill as the vacation that crept up on me — I realized vacation is less a place and more a state of mind. I once had a religion teacher in high school who asked us to not visit his office during certain hours after school because he was going to the beach. Curious, I crept by the door one day after school to find him sitting with perfect posture on the floor, eyes closed, with soft music playing. Having previously thought he was crazy because there was no beach for hundreds of miles, I found myself in awe of him. For all intents and purposes, he went to the beach every day.

There was something really refreshing about the four hours I spent in Rhode Island that day. I would even go so far as to say God-like. God does not schedule time to meet with us. He is not half-present and checking email or Facebook while we’re trying to have a conversation with him. He is fully present with no agenda, no thought of the future or the past, and no smart phone. He just is.

That Sunday in Watch Hill, I simply was. I see it as no coincidence that Jesus met his disciples regularly at the seashore. There is something so clarifying about that space. All you can do is gaze at the vastness and the emptiness before you, with the world and all its worries behind you, literally. Prime real estate for an encounter with God, if you ask me.

So, I guess I did go on vacation this summer, after all. However, I returned to Boston with a lesson in mind: I can go on vacation not only wherever I want, but also, like my high school teacher, whenever I want.