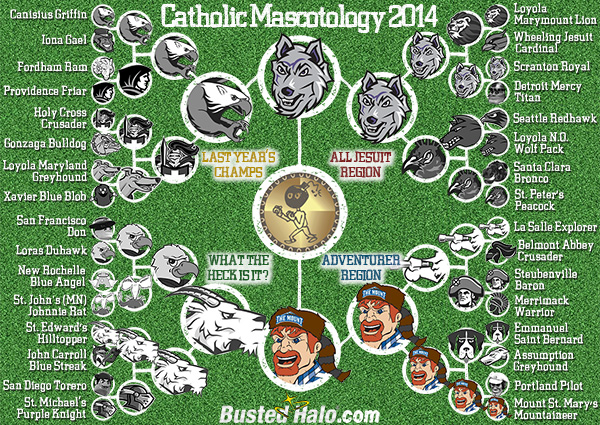 What a crazy 4th day of Catholic Mascotology as Iggy, the Scranton Royal Wolf, took down the defending champion, the Canisius Golden Griffin, thus robbing Petey Griffin of the chance at a second title and the first ever Catholic Mascotology dynasty. Though the Griffin grabbed an early lead and led by 400 votes in the afternoon, by late last night Iggy had surpassed his opponent by almost 500 votes and when voting closed this morning dutifully handed the Golden Griffin a devastating 700 vote defeat:

While fans of the Griffin and of Scottish independence sit in mourning today, the Michael Scotts of the world sing in praise.

Meanwhile, yesterday’s other contest was much, much closer as the St. Edward’s Hilltopper took on the Mount St. Mary’s Mountaineer in what many were calling the Mountain Bowl. St. Edwards was on top for most of the day and into last night, but this morning, Emmit S. Burg the Mountaineer had pulled within striking distance and at ten minutes before voting closed had it all tied up. By the time voting had ended, the Mountaineer was able to successfully climb over the goat for the slimmest of victories:

We’re not sure if the Mountaineer owes the win to his mountain man strength or the devotion of the Mount Maniacs, but whatever it is he will need it today tenfold as he takes on Iggy the Royal Wolf in this year’s Catholic Mascotology Championship. Begin voting now!