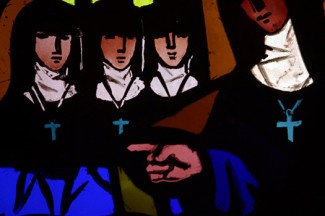 Both of my parents believe in God. I can’t say much more about what they believe because religious beliefs are so idiosyncratic and personal and tangled up in who a person is deep down in their marrow it seems presumptuous to try to articulate any but one’s own. Also, to be perfectly frank, my parents very seldom shared these beliefs with me. We did not go to church. We did not pray as a family. We did not read the Bible. I had the freedom to discover God on my own. And even though there were times when I wanted to go to church and I wanted to learn more about the Christian God cryptically entwined in the pages of the Bible my mother had received as a child, I am thankful for this. I am thankful for the freedom to feel that God is mine to know… mine to discover.

And then high school happened. Like any self-respecting American teenager, I set out to rebel against the mores of my parents… my once-hippie, liberal parents. I started attending a Pentecostal church with a friend. I joined an Evangelical Bible study club at school. It made my mother crazy. To her credit, she never forbade it. She asked me questions about what I was learning and what I believed. She listened. And eventually I stopped going. I had come to love Jesus, but the conservative, charismatic Protestantism of my Christian beginnings left me feeling bewildered.

I had come to the heart of the church that had loved me and supported me and nurtured me and saw that it was not my heart.

College ushered in a renewed interest in finding a Christian community to call my own — a community where I made sense. The chaplain at Wilson, the small women’s college I attended, was young, female, progressive and feisty. Through her I was introduced to a world of theology that centered on social justice, wholeness and community as ways of following Jesus. I began to attend a Presbyterian church in town, which, after my Pentecostal introduction to Christian worship, seemed downright liturgical. I grew to love the order and preaching and hymnody of that church. With the encouragement of my chaplain, I began to discern a call to ordained ministry. I wanted to share the God I discovered — the God of goodness, justice and love. I thought the pulpit was the way God was calling me to do that. The first time I told my mother that I wanted to go to seminary we were sitting on a porch swing together at Wilson. I think my mother, in all of her blessed good-intentioned globalism, had hoped my burgeoning interest in spirituality would come to fruition in my becoming some sort of radical Buddhist nun with a shaved head and a penchant for civil disobedience. Instead I was going to seminary. To be a pastor. She was dumbfounded.

Seminary wasn’t exactly what I thought it would be. It was not a safe place. It was not a place where I could comfortably hold on to the things I knew for sure. Thank God for that. It was challenging and heartbreaking and life-giving. I learned the Bible as an academic discipline. I learned the history of the Christian tradition. I had the opportunity to shadow a pastor I admired. Part of my education required that I encounter the father of Reformed/Presbyterian theology, John Calvin. As I studied his magnum opus, Institutes of Christian Religion, I delved deep into the theology of my tradition. I had come to the heart of the church that had loved me and supported me and nurtured me and saw that it was not my heart. In the midst of my ordination exams, I had to leave. And leaving was honest, but it was hell.

Mass was embodied and sensual. Mass was ancient. Mass filled me up inside. Mass felt like home. It contained something like magic, only better.

During this time of grappling with my faith, the unthinkable happened: I fell in love. I fell disastrously in love. I fell the kind of in love that makes you forget to eat. When I met him in the laundry room at seminary, I knew right away that I was going to marry him. And I did. Six months later. The certitude I felt about our relationship made my total lack of certitude about my faith and my vocation painfully obvious. When my soon-to-be husband and I debated theology (because that’s what seminarians in love do… it’s awesomely geeky), he — a brilliant theologian-in-progress and a candidate in the RCIA — would uphold the Catholic position, and I — a professional Protestant with all the right answers — would take up the cause of the Reformation. In the context of this playful back and forth, it occurred to me that I didn’t really believe the position I was defending. In fact, his position seemed much closer to what I actually believed. I started attending the RCIA with him. I attended Mass on Saturday nights before taking the train in the morning to preach in a Protestant pulpit. At Mass I learned to worship God in gesture and genuflection. Mass was embodied and sensual. Mass was ancient. Mass filled me up inside. Mass felt like home. It contained something like magic, only better. Mass was the place I could go to find the Bread of Life … the Eucharist. And I hungered for it. Desperately.

After two years in the RCIA, I came into the Catholic Church. Here I remain in this Church — my Church — where holiness is possible, where I worship with my whole self, where I find my fierce and radiant Queen, where I am called to constant transformation, where I seek help and consolation in the Communion of Saints, where I receive Jesus in the Eucharist and he fills me up with all that is good and holy so I can go out into the world and be about the business of Love. This is the spiritual home my parents gave me the freedom to seek. This is what I have found — after working and praying and searching and, in the process, leaving something of a mess in my wake — in the Catholic Church. Thanks be to God.