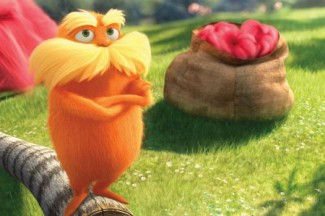 Since I was a kid, I have been in love with Dr. Seuss. His writings are so prophetic and contain such simple but powerful social commentary. He’s a man after my own heart. Although, The Cat and the Hat still kind of weirds me out, so many of his other books are just so good. I don’t know much about Dr. Seuss’ life or how he came to possess his set of values and morals but I can’t help but note how Catholic his writing is. A lot of his books line up with the seven principles of Catholic Social Teaching. Horton Hears a Who — Dignity of the Person. Yertle the Turtle — Rights and Responsibilities. How the Grinch Stole Christmas — Call to Family, Community, and Participation.

But The Lorax, this has always been my favorite Seusian story. When I saw that The Lorax was coming to theaters, I couldn’t wait to see it. As much as I love the book The Lorax, I thought they did a good job with the movie, as well. What stood out to me most was how Jesus-like they made the Lorax. Danny DeVito voice and all, there were a few instances when I immediately thought of things Jesus says in Scripture.

The gist of the book is that there is a guy — the Onceler — who finds a Truffula forest. He chops down one Truffula tree and makes a Thneed. The Lorax pops out of the tree he has chopped down and scolds him for destroying the tree to make something so useless. Their relationship continues as the Onceler chops more and more trees down and grows his business.

In the movie, when the Lorax pops out of the tree, it is a huge event. There are amazing lightning effects with dramatic music, he floats down from the clouds, the whole bit. But the Onceler sleeps through the whole thing. When the Lorax is trying to explain who he is and how he came, the Onceler dismisses him as a crazy old guy. The Lorax incredulously asks him how he possibly missed the whole spectacle with thundering and lightning. So the Onceler tells him to do it again to prove himself. The Lorax shakes his head and tells him “it doesn’t work like that.”

This is just like a conversation that Jesus has with the Pharisees in Matthew 12:38-45. Jesus performed so many miracles, all the healings, bringing people back to life, etc., and yet the Pharisees still ask Jesus to perform on command. They want Jesus to prove himself the Son of God on the Pharisees’ terms. But Jesus doesn’t. It doesn’t work like that. They may have missed the miracles because they didn’t physically see them but it was mostly because they didn’t believe. Even if they had seen the miracle they would have been blind to it because their hearts were not open to it. It’s like those people who are constantly negative and always complaining. There are plenty of good and beautiful things that happen to these people but they are blind to it because they aren’t looking for it in the first place.

As the story continues, the Onceler gets more and more annoyed with the Lorax. The Lorax keeps telling the Onceler that if he doesn’t stop cutting down trees and ruining the air and the water, horrible, cataclysmic events will happen. The Onceler gets greedier and chops down more trees, and he asks to the Lorax, “So, where are all these horrible things that are supposed to happen?” Again, the Lorax responds, “It doesn’t work like that.”

The Lorax is prophetic just as Jesus was. Jesus spoke of the Temple being destroyed and no one understood what he meant. I’m sure the people that didn’t believe Him said, “Ok, so you said it was going to happen, why hasn’t it happened yet?” Because sometimes the consequences of our actions take a while. Sometimes a bad decision is only realized a long time later.

In the end, the story is about a man who was clearly shown the right thing to do but who did the opposite. A man who should have taken care of the creation that God gave him but instead let himself be overrun with greed and led astray by consumerism. After seeing the effects of his bad decisions — the city turns into a plastic city completely devoid of plants or even dirt, and citizens can only breathe clean air if they buy it bottled. The Onceler truly and wholeheartedly regrets his actions. In the movie, the Onceler has a beautiful reconciliation at the end with the Lorax and gets to atone for his sins. It is a moving scene and really speaks to the joy and peace one can feel when reconciled with God for some truly horrible, and life-changing bad decisions. In seeing the effects of his actions he is humbled and opens himself to God’s grace. And even if it takes many years, that little glimmer of grace that he allowed into his heart makes him open to trusting the kid who changes everything in the movie.

The irony of making this story into a movie with over-the-top action scenes and in 3-D is not lost on me. But the story of the justice, grace, and mercy of God that is weaved throughout the movie is one that I like and one that kids and adults should hear more of at the cinema.