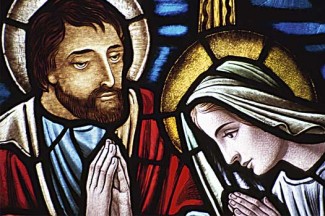 “As we wait in joyful hope for the coming of our Savior, Jesus Christ.” I’ll never forget the cadence and inflection of those words, mostly because I heard them week in and week out for the vast majority of my life. If I’m being honest, those were probably the only words of that entire prayer that I heard during my less mature years, since at the period of my life I spent the rest of the Our Father focused on squeezing my brother’s hand as hard as humanly possible. Don’t act like you didn’t do the same thing.

I think that phrase is a good summary of what Advent is supposed to be about: a joyful waiting period for the birth of Jesus. But hope is the key, because that’s why we’re joyful in the first place. We know that with Jesus and with his message, something better than what we have is coming. What that something is depends on your situation — if you’re me at this very moment, it’s figuring out what to buy my girlfriend for Christmas because I have no ideas. Then again, I’m supposed to be living in the now and not get caught up in Christmas. Does that reasoning work when I explain to people why I didn’t buy them anything?

For a shining example of hope, look no further than Jesus’ step-dad, Joseph, who I will also point out is my namesake. Let’s do something not nearly enough people do and review Joseph’s life: He’s betrothed to a young woman named Mary. Then, one day he finds out Mary is pregnant. He asks Mary why and how, presumably panicked, and Mary tells him the truth: God is the proverbial “other man” and she’s now carrying a divine child. Also she’s still a virgin. At this point, we’re forced to assume that Joseph was backing away slowly. Even despite the apparent lameness of Mary’s excuses, Joseph is generous in his decision to quietly divorce her, sparing Mary the wrath of a harsh penal system that frowned upon adulterers. And by “frowned upon” I mean “stoned.”

But that doesn’t happen — because an angel appears to Joseph in a dream and confirms that Mary wasn’t lying. (I like to think that Joseph interrupted the angel when he learned this, saying “Wait — does this mean that I’m the one who’s going to be apologizing for this?”) Of course, Joseph sticks with Mary, Jesus is born and raised by his parents to become, ultimately, the Savior of the world. Considering what the Palestinian economy was like at the time, that’s huge.

Joseph’s story is striking to me because, after putting myself in his place, I’m not sure I would have believed the whole thing — even after one of God’s angels came to me and told me to put away the divorce papers. What reason did he have to believe that he wasn’t being played like a lute? And what kind of courage does it take to force yourself to believe that, deep down, you can do an adequate job of raising God’s only son?

All of that can be explained by Joseph choosing hope. In today’s Daily Jolt, Christopher Reeve puts it nicely: “Once you choose hope, anything’s possible.” Even overcoming Kryptonite. Joseph chose to hope that Mary was telling the truth, chose to hope he wasn’t crazy when an angel appeared to him, and chose to hope that he’d have whatever it took to be the father in the ultimate First Family. There was no logical, rational reason to — he just did.

Which brings me to the hardest part of joyful hope: trust. Even though we’re told something better is coming, we’re not told what. If you ask his apostles, you’ll find that Jesus could be maddeningly vague, which I’m convinced is a genetic trait he got from God. And I’m sure that even though Joseph was told everything would be alright, there was still an inkling of doubt somewhere, making him question the wisdom of trying to be a stand-in for Yahweh. But whether it was his love for Mary or faith in God — or some combination of both — that made him do it, Joseph, along with Mary, lived the first-ever Advent when he said, “Sure, I’ll stick around.” If we’re to be guided by an example of faith, love, trust and joy this Advent, let it be him.