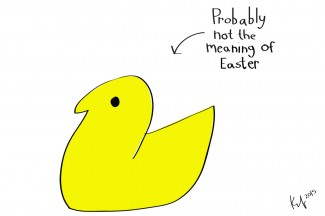 My name’s Kat. In my spare time, I like to draw up checklists of silly little challenges for myself to complete. These challenges have produced a series of terribly sewn shirts, the world’s smallest bed frame (or largest park bench), and the most fabulously wrapped bike handlebars known to man.

In the past, Lent fell on this list as just another challenge to complete and check off. Every year I gave up the same not-so-great habits, and promptly spent the next forty-six days quietly congratulating myself on my ability to shun Facebook and forgo sweets. After completing these same challenges for a few years in a row, Lent got pretty easy. I took this to mean that my incredible sacrifices not only proved my dedication to my faith, they probably nominated me for future sainthood.

Then one Easter, as I celebrated in a computer-screen haze, my cheeks filled with the sweet marshmallow-y goo of one thousand yellow Peeps, it dawned on me that perhaps it wouldn’t hurt to be a little more intentional during the Lenten season.

Lent 2015 feels like a good year to be a little more intentional. (This might be in part because I am publicly blogging about my Lenten journey.) To prepare, I spent some time reflecting on how to do so and quickly reflected that I’m absolutely terrible at praying. While I can guarantee mealtime prayers and some sloppy, sleepy bedtime ones, I rarely set aside time for intentional prayer. Most of this is out of laziness, but I have been known to whip out the good ol’ standby of something came up.

During this Lenten season, I plan to say Rosaries on Mondays, Wednesdays and Fridays. The number of times I’ve said a complete Rosary hovers slightly above zero and I hope to bring it up to at least double digits. I also plan to journal daily using the prayer process found in Matthew Kelly’s Four Signs of a Dynamic Catholic. I’ve sporadically used this process in the past and found it to be an incredibly helpful tool to structure prayer. 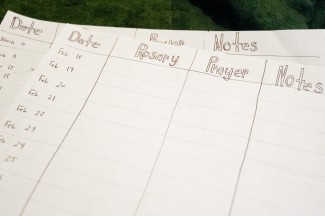 And because I’m still me, I’ve drawn up a Lenten calendar where I can check off my progress.