Did you know that Ash Wednesday is the busiest church day of the year? I was surprised to hear that! I thought it might be Easter, but then someone explained to me that chocolate hangovers might affect attendance. So, I thought the busiest day must surely be Christmas, but then I remembered all of the big movies that are released on Christmas Day, and it made a little bit more sense. But Ash Wednesday? I guess on the one hand, there’s no chocolate around because people have given it up for Lent. And then on the other hand, everyone knows that Hollywood waits for the dead of winter to release all of its bad movies because the Oscar nominations have already come out and it’s too cold to leave the house anyway. 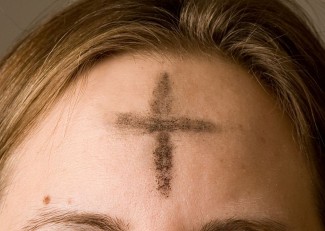 But if it’s too cold to leave the house, why does Ash Wednesday continue to be so popular? Maybe it’s because there are giveaways on Ash Wednesday. When you go to a trade show and walk through all of the booths, the most popular booths are the ones with the best giveaways. Like the company giving away mouse pads and the USB drives. On Ash Wednesday, we receive ashes on our heads. But that doesn’t explain why Ash Wednesday is so popular. After all, the ashes we receive are very much tied to the idea of death. And death is not really a popular idea.

When reflecting on this dilemma, I thought back to a conversation that I had a few years ago. I was having a cup of coffee with a parishioner at a church where I was working. We were about the same age, in our mid-30s, and she had lost her father a few months before. I asked her how she was doing and she told me how she was coping … and in the middle of our conversation she said something very extraordinary. She said, “At some point, it really does all end, doesn’t it?”

I knew what she meant. Death is not something most of us consider all that often, which is not necessarily such a bad thing. After all, there are so many great things about life to delve into and celebrate. There’s family to spend time with, people to fall in love with, projects to throw oneself into, sunsets to embrace, and music, art, and food to enthrall us. It’s why we come up with bucket lists — I myself am crossing one of those items off of my bucket list when I visit Disneyland for Spring Break!

But in our culture where we seek to live out our “inalienable rights to life, liberty, and the pursuit of happiness,” death seems to be kind of a contradiction to all of that. Death is kind of a killjoy. As a result we don’t always know how to deal with it. For a very long time, much of the press was banned from filming the arrival of soldiers who had been killed in action overseas. Death was put out of our mind. On the other extreme, over the last two weeks there have been usual complaints that, once again, the media has been completely obsessed with the death of a celebrity. And while there might be some truth to that criticism, maybe the out-of-control exposure of the death of a singer is the only way we know how to deal with the end of things. Maybe it’s one of the few times we are given permission to look at death and so we overdo it. After all, most of us are not always successful in our pursuits of happiness, but death … at some point everyone does it.

But in order to remember whose we are, we need help. We need the reminder of the ashes. We need the reminder of the Lenten Season. And we need each other as a church community. We don’t need church because it is the popular thing to do among the “good” and “holy” crowd. We need church so that we can get into the guts of these things called life and death. We need the support, insight, and love of the larger community as we all begin this Lenten journey. And of course, we need the love, insight, and support of the God whose we are so that we can live up to the other admonition we receive when we receive ashes: “Turn away from sin and be faithful to the gospel.”