At long last, the final post for Kicking and Screaming.  Thanks for reading everybody!

As I begin to write this last post of “Kicking and Screaming,” I am flying back to my permanent ministry assignment after having said the last of my “official” Masses of Thanksgiving in Austin, Texas. After ordination it is customary for many new priests to celebrate Masses at the parishes that had a significant role in their formation and spiritual journey. Indeed, in following weeks after ordination I went on what some of my friends referred to as “the tour,” celebrating Masses along the eastern seaboard at various churches that had held major roles in the previous forty years of my life. (T-Shirts from this tour are still forthcoming.)

But if January sounds a little late after a May ordination to still be celebrating these Masses, the Lone-Star “leg” of that tour was originally scheduled for the third week in June. Then my oncologist scheduled the radiation treatment for that week with a required quarantine for the next three days.

It was probably well and good that I had to put off the Austin trip. My treatment required me to go on a low-iodine diet for four weeks, requiring me to avoid 80% of the food I usually consume. When spending a week in Austin, Cheap-Eats Capital of the United States, any kind of diet is usually thrown by the wayside. Still, if postponing a trip to treat a disease for which the prognosis was excellent was the worst price to pay, I figured out that I was coming out ahead of the game. As more than one person told me during the time, “You’ve come too far, God would not take you now.” During my treatments, I held onto that thought like Linus held on to his blanket.

In the 32nd chapter of Genesis, Jacob encounters what is described as a man — but understood to be an angel — and wrestles with him throughout the night. As day breaks the angel asks to be let go, to which Jacob responds, “Not until you have blessed me.” The angel does, but not before striking Jacob in his hip socket, permanently wounding him. After the encounter, Jacob names the place where he encountered the angel Peniel, “because I have seen God face to face, yet my life has been spared” (Genesis 32:31).

As this “Kicking and Screaming” journey comes to a close, I end not with a knee to the hip-socket but a needle of thyroxin shot into my butt. After six years of wrestling with God (and indeed a lot longer than that), I too have been spared … but not without injury  I guess that is the way it has to be with a loving God, maintaining that balance between trusting the One who is willing to wrestle in the mud with us while understanding the principle that at the end of the day, “Father knows best.” In all of our spiritual journeys, we are continually left to learn the lesson, “I am God, and you are not.”

Getting a cancer diagnosis certainly put that trust to the test. Getting the “all clear” from the doctor two months later helped me to loosen my usual vice-grip on doubt. While I can certainly say that my relationship with God has grown by leaps in bounds, I am still — as are most of us — a work in progress. Should I have another sleepless night in which I sense the Almighty giving me marching orders, I am still more likely to respond in a manner more like Jonah than Mary. Still more likely to respond with a “WTF?” instead of a “Thy will be done.” But maybe a little less likely than I was, say, six years ago.

But if that experience with illness turned out to be yet another lesson on the importance of faith, a Facebook status a week after my treatment served as another reminder of the perilous world in which faith lives. “RIP Kevin Bellot, CSsR: we will miss you.”

Kevin Bellot was a classmate who was about a year behind me at the Washington Theological Union and was studying to be a Redemptorist priest. A few years younger than me, he was set to be ordained a deacon this past fall and a priest the following year. Then while visiting the Dominican Republic over the summer, he collapsed suddenly from reasons that were not then known and passed away. In addition to the feelings of grief, it was also hard not to feel that Linus’ blanket had been taken away. That the reasons we come up with when facing perilous times do not always hold up to larger scrutiny. And yet we are still asked to trust. We are still left to continually re-learn the lesson, “I am God, and you are not.”

We received a lot of compliments about the liturgy from those who attended our ordination in May, especially from those who had attended a number of ordinations in the past. Some of the reasons include the fact that the Paulists are very good hosts. The three of us who were being ordained had also put a specific emphasis on the service aspect of priesthood in the liturgy, as opposed to the “church triumphant” theme into which so many other ordinations seem to fall. But in addition to all of that, we also had a great bishop who presided. Relaxed. Approachable. And in his homily to us, Most Rev. Walter Hurley of Grand Rapids talked about “the adventure of priesthood.”

On my very first night in formation, I started writing this blog late at night while flipping through the channels, still stunned to find myself in the place that would become my home for the next six years. When I hit the button labeled “Guide,” the movie title Kicking and Screaming appeared on the menu and that seemed like a good summary of where I was in my life at the moment. But not being in the mood for a Will Farrell movie, I kept scanning eventually landed on the last few minutes of The Shawshank Redemption just as Morgan Freeman was talking about the excitement one feels at the beginning of a new journey whose conclusion is unknown. The last lines of the movie were uttered as his character was crossing the southern U.S. border into Mexico: “I hope.”

When people ask me why I chose to join the Paulists as opposed to a different religious community, I usually respond that one of the reasons is that I have always been interested in the American question; the Paulists always seemed to include that question within their mission. And there I was in mid-July, crossing the northern U.S. Border into Canada, on my way to my first assignment in Toronto to officially begin the adventure of priesthood. Again beginning a new journey whose conclusion is unknown … hoping that my trust in God was stronger than it had been six years ago. 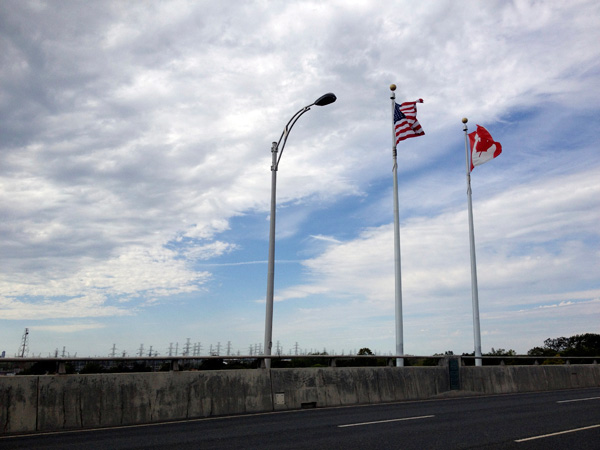