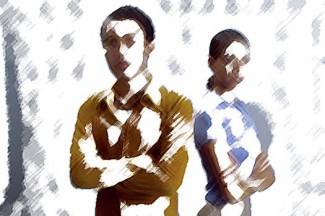 “OK, you two, stand up and look at each other. Vanessa, you’re a fiery Latina. Brandon, you’re WASP-y and keep everything bottled up inside. But now you’re on the same team so you have to work together.”

This is probably the one comment that has stuck with me the most six years after meeting with our priest during Pre-Cana (marriage prep required if getting married in the Catholic Church). I know I’ve talked about some ways that Brandon and I are different, but we differ tremendously in how we communicate.

Years after we went through Pre-Cana ourselves, we now facilitate a Marriage Prep Retreat for engaged couples during which I’ve heard many couples give the advice that arguments or heated discussions should be had at the right time when both spouses are open to communication. “Don’t start a conversation when either of you is tired, stressed, or already very angry,” they would say.

Sure, that makes sense when you first hear it but I’ve never been able to follow this advice. Our priest nailed it. I am fiery. When something is bothering me, I have to say something right then.

Brandon is the total opposite. He gets annoyed as much as I do, but he is able to let it go much more easily than I am. This is a pretty great personality trait, except when he can’t let something go he still keeps it inside until the issue comes to a head in a pretty big way.

This weekend something had been bothering Brandon for a while. We’ve been really busy this summer with weddings and travel and visiting family, so we haven’t had the time to sit down and debrief as much as we usually do. Brandon had been patiently waiting for the “right time” to come along to talk to me but that time kept not happening for one reason or another. And, as can be expected, his anger came out in not the greatest of ways because he had just had it.

This made me think about the advice to delay arguments until the “right time.” If you waited for the right time, you might be waiting for a long time. There are a million things that come up. We get sick. We have family visiting. We have big projects due at work. We travel. If we were to wait until we were both well rested and not stressed, we might need to wait for retirement when all the kids are out of the house — and probably not even then.

I really think that this advice given to couples needs to be qualified. If you need to have a very purposeful, we-need-to-take-notes-while-we-talk talk, like planning out the nitty-gritty of a budget or deciding whether to move to a new city, then yes, you need to both be in a mental space to do that. But if you’re mad or annoyed or hurt or sad and need to get something off your chest, I think it needs to be done as soon as is prudent. If you let it stew until the “right time,” it likely will become a much bigger deal than it needed to be if you had just said something from the beginning.

Brandon was mad and his growing frustration colored his attitude for the whole weekend and ended with a big argument.

I think there is validity in needing to voice your feelings to get them off your chest, clear the air, and then move on. We don’t need a seven-point resolution, we just need to feel heard and understood, and then we can move on. I don’t even really need Brandon to say that he agrees or that he is going to change, I just need affirmation that he is listening to me. That is how I feel loved.

I’m not trying to say that my way is right and Brandon’s way is wrong (although, it is a little), and I know that we all find what communication works best for us, but the slow seeping of resentment into a relationship is one of the most difficult things to heal between two people. If bottling up our feelings leads to resentment, then we need to voice those feelings even if it’s not the best timing. Better that than ending up with a big blow up in the car on the way home from church.