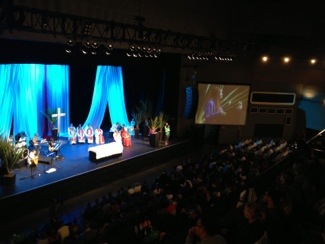 At the end of every catechetical session, the bishop who led the catechesis presides over a mass in that language for the gathered WYD pilgrims. Today, the Archbishop Mark Coleridge of Brisbane, Australia, spoke on discipleship. He uses St. James, whose feast day it is today, as the model of disciples, who are called to give fully of themselves in whatever way God calls.

Archbishop Coleridge was joined by many English-speaking people from England, Scotland, South Africa, Canada, Australia, United States, and others. One thing different that I saw at this mass was that there was someone holding an inflatable kangaroo. Maybe that’s part of the Mass in Australia.