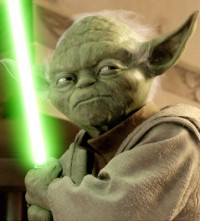 Here’s a fun fact: Mark’s account of Jesus in the desert is just 168 characters long.

The Spirit drove Jesus out into the desert,
and he remained in the desert for forty days,
tempted by Satan.
He was among wild beasts,
and the angels ministered to him.

And yet, we know exactly what Mark’s talking about. We’re right there with Jesus. We understand what it means to be tempted, to be surrounded by questionable company and to be helped along in ways perhaps unexpected. 140 characters or 140 pages, this is our story and we get it intimately, right? We’ve all been in the desert—or something like it.

And we all know—at least, maybe we all believe—that the trip is worth the trouble because it purifies us, pushes us beyond ourselves and points to where we might want to be going.

But it’s also not a done deal. We know the end of the story here and Mark glosses over what might contain important details, details of challenge, struggle, hardship. So, let’s look at another story.

Yoda sent Luke into the cave,
and he remained in the cave for a period of time,
tempted by the dark side.
He was among wild beasts,
and the Force was with him.

Remember this scene in The Empire Strikes Back? Luke is but a Padawan learner, a Jedi apprentice, in search of a teacher who can help him become the best version of himself, someone who can do good in the galaxy. And Yoda sends Luke into the cave to further his training.

It’s a tense scene, right? It’s dark and dank, difficult to see through the mist, full of strange sounds and one imagines strange smells. And he has no idea where he is going—or what he might find. He can only trust in what is greater than himself. Then, Darth Vader emerges, challenges our young Padawan and Luke must rise to the occasion.

And in a vivid, troubling moment, Luke finds that he himself could become the evil he seeks to destroy. In that cave, he encounters a version of himself that is capable of horrible things. He’s not given an answer, only a question and a mission to go forth.

Not unlike Matthew’s version of Jesus in the desert. Jesus is given an alternative vision of the Christ, who he could become if he chooses a different path. And we are told that this is a real temptation—this isn’t a cute story, this is Jesus of Nazareth mustering all he has to dispel the darkness and lies of the enemy, mustering all he has to stay the course that God has called him to.

Jesus, too, gets more questions than answers. And he, too, must rise to the occasion, going out into the wider world to do good. It’s a moment of discernment—but I’ll talk more about that in part 2.

For now, I wrestle with Lent and the deserts, caves and whatever other metaphoric geographic constructions it brings. It’s hard for me to remember that Lent isn’t just a fun time with fewer chocolates, less alcohol and lots o’ fish on Fridays. It’s a time to come face to face with who I am—and who I might be. It’s a time to decide if that person is the best version of myself, the one God is calling me to be, or if that person is someone else.

It is a season of questions. Maybe a few answers.

(Here’s an answer for you—the “Hobbits” portion of this blog’s title will come into play in part 2.)